There will be viewing and time to say Good-bye to Roger on Monday, January 19th, 2021 at Woodlawn Funeral Home & Cemetery, from 9am-12pm. The service will begin at 12:30pm, with a graveside to follow.

To everything there is a season, a time to every purpose under heaven . . .

A time to cry; a time to laugh 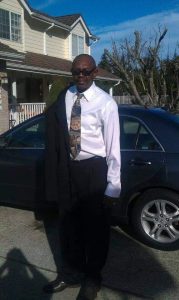 In life, those who take the walk of faith find it filled with contradictions or paradoxes. Faith is an art, not a science which moves us forward for a season and then retreats. Faith is filled with decision-making and is daring; it consists of determination and dedication.

Life itself is filled with aggression and passivity, tempered with giving and taking, positives and negatives. Faith and life are necessary to achieve mountain-moving energy which allows us to reach our ultimate goal. So it was with Roger Stevens.

Roger Stevens was born December 1, 1964, in Fairmont West Virginia. He was the fourth child and the second son to Charles Stevens Jr. and Wyonia Stevens. He was affectionately called “Slodge “ and “Roger Dodger” by friends.

He accepted Christ and was baptized at Morning Star Baptist Church as a youth. He rededicated himself to Christ in 1999. Roger loved to cook; he was known as the “Chef” in the family. We knew Roger was destined for great things as a youth as he hustled to earn his own money by collecting pop bottles, cutting grass, raking leaves and shoveling snow.

Roger played basketball for Fairmont Senior High School where he graduated in 1984. After graduating, Roger took a journey clear across the United States to Seattle Washington.

He work ethic was rewarded with an extraordinary lifetime 32-year career at Boeing in increasing positions of responsibilities. Roger continued to work at Boeing until his passing on January 8, 2021. . He also worked for Steeler, Inc for a few years, 1993 to 1996, as a professional long-haul truck driver.

Roger is preceded in death by his father Charles Stevens Jr.; grandmothers Martha Stevens and Lorraine Wills; and his grandfather Jessie Wills; his grandmother-in-law and his loving niece Carmen Stevens.

Thank God for the dreams he was given,

The goals he set,

The Hand that guided him,

And the invitation received.

“Come, ye blessed of my Father,

Inherit the Kingdom prepared for you”.