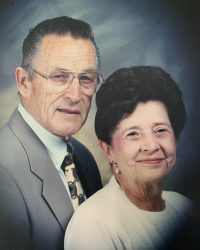 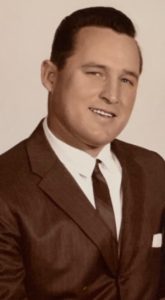 Olympia, Wash. — On Friday, May 22, Robert “Bob” Charles Edward Schuetz, 91, passed away at home from cancer. He was born April 26,1929, in Middleton, Wis., the third of nine children to Erwin and Ingaborg Schuetz. He grew up in a two-room brick house built by his maternal grandfather and Norwegian immigrant, Anton Ustad, on the 100-acre farm owned by his father’s parents, Julius and Caroline Schuetz, at the corner of Schroeder and Gammon roads in Middleton. The Schuetz family was part of the early German settlers who helped establish Middleton.

Bob was the quiet brother with a sparkle in his eye that matched his grin. He went to grade school in the one-room Gammon School up the hill, and all of his classmates were either siblings, cousins or a Frisch. He also spent his free time with them, creating adventures on the property that included hunting or shooting practice.

At Middleton High School, he was a talented boxer and football player. And, it was there he met his first and only love, Doris Anna Mae Laufenberg.

Before he could graduate, he was drafted by the U.S. Army into the elite 82nd Airborne Division to become a paratrooper, posted in Fort Bragg, N.C. where he served four years starting in the lead-up to the Korean War. The 82nd was never sent to Korea, since both Presidents Truman and Eisenhower held them in strategic reserve in case the Soviets waged a ground attack somewhere.

While enlisted, he married Doris on September 17, 1949. They had been and would always be best friends in both love and business. She was his dancer partner, his calming hand and his joy.

Even as a boy, Bob told his brothers he would be a gunsmith one day, and when he got out of the Army, he leveraged the G.I. Bill to follow his passion and attend the Colorado School of Trades, a renowned gunsmithing school just outside Denver.

Even away from home, Bob’s connection to his family stuck. In 1954, his brother-in-law, Bud Loomis, brought Bob’s little brother John and cousin Lloyd to Colorado to hunt elk with his gunsmithing friends in the Red Table Mountains, near Aspen. Thus began a treasured annual trek in his yellow, red and white 1949 Packard Hearse, which continued, with a circulating group of family, well into the 1970s always served with lots of jokes and a few hands of in-between. He would continue hunting with his family, particularly his son and grandsons, throughout his life, traveling all over the west.

After he finished trade school in 1956, he and Doris moved back to Middleton to live with his father-in-law on Elmwood Avenue, where he opened his first custom gunmaking and repair shop, Bob’s Gun Shop, next to the Middeton Post Office. He eventually moved his business down the street to a bigger building next to the old movie theater.

While in Middleton, they had two children, Brian and Diane. Throughout their 61-year marriage, Doris and Bob were equally committed to raising them in a secure and loving home, and every decision supported that goal. He could occasionally be proud and a little stubborn, yet they always seemed in perfect harmony, since Doris, with her gently steady manner, would sway his viewpoint to one he believed was his own. He was the kind of father where his 16-year-old daughter could sit on his lap and his son was always held in loving esteem.

In 1964, to build on his skills, he moved the family to Salt Lake City to learn the barrel-making craft from famed researcher and the largest custom gunmaker of his time, Parker Otto (P. O.) Ackley. In 1965, they moved again to Colorado Springs, where he worked at the Army base at Fort Carson. On the side, he opened Schuetzen Gun Works in a small shop and pursued gunsmithing on evenings and weekends.

In 1975, he transferred to the Fort Lewis Logistics Center just south of Seattle, once again taking the family on a new adventure. They would settle down in Olympia, Wash. for the rest of his life. In 1976, he used the money he’d saved for retirement and took his gun-making business full time, renaming it SGW, which later became Olympic Arms, Inc. He was the father of the sporting AR-15.  It quickly became a family affair. Brian and Dave Haupert—who would later marry Diane—worked by his side for over 40 years. Diane, joined them for 23 years, assisting Doris with keeping the books. Although Brian took over as president of the business in 2000, and Diane as chief financial officer, Bob never retired; he came to the shop daily until just two weeks before his death.

Bob’s determination and integrity was softened by his sensitive nature and strong love for his family. A teetotaler, like his father, his legacy—even more than his skill as a gunsmith—is the positive, loving life he created with his family, particularly his wife and children and eventually their spouses and his grandchildren. He was an avid fan at his athletically gifted grandchildren’s sports events. He was proud of the life he built that allowed them to travel and work together.

His entreprenurial drive and desire to provide security for his family through the gun industry’s ups and downs extended to taking occasional risks—not all successful. But he was proud he’d tried. Armed with the belief you could achieve anything if you stuck with it long enough, he started several side ventures which included land purchases all over Washington state. He wouldn’t give up because he believed the path to success could clear in the next instant. Have faith, and it will go your way.

He never did anything for flash. In fact, Bob always said, “I hate money, but you can’t do anything without it.”  A generous man who, in 2004, celebrated his lovely 55-year marriage to Doris with their extended families by hosting those who could attend—including nieces and nephews—on a cruise of Alaska’s Inside Passage. A part of him was always that little boy who grew up without running water or heat in the tiny red brick house. He wanted his family to be proud of him. They were and will always be.

Bob is survived by his son Brian (Sharon), daughter Diane (Dave Haupert), grandchildren Vincent (Holly) Schuetz; Kelsey, Michael (KaTrina) and Jacob Haupert; Andrea (Nik) Soll and Tina Roberts as well as 12 great-grandchildren. He’s also survived by his eldest sister, Phyllis Roth, his younger siblings John (Barbara) Schuetz, Barbara (Bud) VanAlstine and Janet Hummel and many beloved nieces and nephews and their children. Bob is preceded in death by his parents and his beloved wife, Doris, who passed in 2011, as well as his sister Margaret, brothers Leslie, Paul and Donald, and his sisters-in-law Marion Zimmerman, Severa “Vera” Bauman and Joan Cruse.

Bob loved well, and he was well-loved.

If you wish to donate in Bob’s honor, please consider the Buffalo Bill Center of the West in Cody, Wyoming.  Bob donated many weapons to their firearms museum and supported them throughout his life.  He enjoyed visiting there – Cody was a special place to him.

A graveside service will be held on Thursday, June 4, 2020 at Woodlawn Funeral Home.