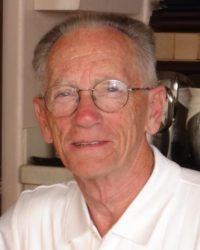 Richard Gene Korver “Dick”, age 84, of Lacey, WA died Thursday, Feb 14, 2019, at home from a recently diagnosed illness.  Formerly of Wenatchee, Gig Harbor & Sumner, Dick was born Aug 12, 1934 at Fort Lewis, the son of James and Gladys Anderson Korver. He grew up in Tacoma with his sister, Jeanette and brother, Bob and is a 1952 graduate of Lincoln High School. He joined the Naval Reserve in high school, enlisted in active duty in 1953, and served on the USS Yorktown during the Korean War from 53-56. After leaving the Navy, he married Beverly Creten and moved to Long Beach to attend Cal State, majoring in Management. They had 4 children, Susan, Rick, Jeff and Julie and lived in Huntington Beach. He began his long career in Data Processing/IT in 1957 while attending college.

In 1973, Dick married Linda Burghardt Loepke. Together they raised her children, Lance and Nikoll Loepke, moving to San Jose and then to Sumner, WA.

Dick tackled a major home remodeling project in Sumner, followed by overseeing the building of 3 homes from the ground up in Gig Harbor and Wenatchee. He was unafraid of large complex projects and had great attention to detail and a tireless work ethic.

Dick is survived by his loving wife of 45 years, Linda; his mother, Gladys Kepner of Puyallup; sister, Jeanette Imrie of Bonney Lake; half-sister, Paula (Jeff) Pielak of Puyallup. He is survived by sons: Rick (Jeanne) of Olympia, Jeff of Sequim; daughter, Julie of Rochester; step-children, Lance (Jacqui) Ramsay of Bellevue and Nikoll (Kirk) Noe of Rocklin CA, 2 grandchildren, 4 step-grandchildren, 7 nieces and a nephew. He was preceded in death by his father, James, brother, Bob, and daughter, Susan.

An Interment Service is scheduled for March 1st at 9:30am at Tahoma National Cemetery in Kent WA.