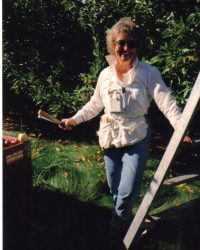 Her life was full. She taught and painted and farmed and rode and gardened and made
things and loved a man and raised children and cooked and befriended animals and
held forth and listened well and kept confidences and chaired committees.

But she rarely told stories, especially about herself. She left a lot to the imaginations
that she fostered in her children.

We have some facts. She was born on April 30, 1931, to Carl and Margaret
Mansperger, who had a dairy near Kittitas. No one had money in those days. For some
time her parents didn’t have an automobile. I imagine that they didn’t even have a
tractor or a truck but instead had big, slow workhorses, whom she petted and who let
her sit on their backs in the evening as they snorted and munched hay and plodded to
the water trough. Her parents eventually got an automobile, yet in the art she made
later, horses, cows, people, and plants appear, but never automobiles.

Her given name was Margaret, but that was also her mother’s name, her grandmother’s
name, and the name of several other relatives, so she went by her middle name,
Loraine.

Loraine was in school in Kittitas during the war, which ended as she was entering high
school. Many men were away, so her father was probably shorthanded on the farm,
which the war made more profitable but also busier. She was still small, but she was
also the oldest of the four children, so she not only helped her mother in the house, but
also helped her father in the barn. I imagine her rolling bales of hay down into the feed
bunks. When she had to, she lifted one end of a bale and leaned it against the rim of the
bunk so that she could tip it in. She cut the twine with scissors, and parted the teasmelling layers of hay as the Holsteins pulled at it with their tongues and filled the air with their grassy breath.

Loraine must have acquired a roan horse at about the end of the war and galloped it
over the rolling hills and curving paths of the Denmark District and Badger Pocket.

In high school, she edited the school newspaper and was the class valedictorian.

She enrolled at Central Washington College of Education, which is now Central
Washington University, but which a few years earlier had been called the Washington
State Normal School because it provided the accepted course of training for teachers.
The old name may also have carried an atavistic sense that teacher training should
perpetuate social conventions, but at the renamed school Loraine met artists and
decided to be one of them.

If anyone ever told me how they met, I’ve forgotten. One of the traits she bequeathed to
me is an uncertain grasp of isolated details. But I imagine one of those afternoons so
still it seems about to break and so precariously balanced between summer and fall that
it feels both hot and chilly, when the third cutting is baled and the wheat fields are
stubble, and he is walking in his olive uniform and service cap with his duffle over his
shoulder and nothing to hear but his own footfalls and a grasshopper how and then
creaking across the road that rises and falls through the tawny hills. Then he hears the
beat of a trotting horse over the rise ahead of him, and he sees the roan with its ears
peaked and then the girl with her black mane and dark eyes.

She pulls the horse up and asks, “What are you doing out here?”

“Going home,” he says and resumes walking. She turns the horse and rides beside him.

He smiles, his teeth bright against his freckled skin. “Not really. From fixing airplanes in
California.”

“But you were in the army?”

“And you live around here?”

“My folks just bought a place up the road. Or so I hear.” He smiles yet again.

She wheels the horse and canters off. He laughs quietly, shakes his head, and goes his
way, grateful for the cooling breeze.