A Celebration of Don’s life, with military honors, will take place at Olympic Memorial Gardens on Saturday, July 17th, 2021, beginning at 10am.

A reception will follow at Mountain View Church of the Nazarene, from 11am-1pm. This will be a time of fellowship, reminiscing, and sharing stories among friends and family. Mountain View Church is located at 940 Israel Rd SE in Tumwater.
A light lunch will be provided. Your RSVP is appreciated; please comment with the number attending.
Per the state’s current COVID restrictions, if you’re not fully vaccinated, you’ll need to wear a mask while indoors.
Obituary Viewed 3098 times 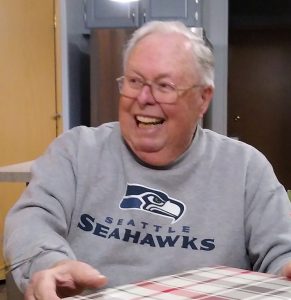 Don was born in Olympia, WA and lived most of his life here. His family moved around some in his early childhood, living in Chehalis, Elma and Tenino. He grew up with his two sisters Martha and Peggy. He graduated from Olympia High School in 1960. During his school years he enjoyed being in chorus, performing in plays, and being a part of the class officers. One of his favorite memories was being a camp counselor for several years at Spirit Lake, he spoke of those times often. Don had a few jobs through school also; he had a paper route, worked at his Dads tire shop and at the Olympian Hotel.

After graduation Don joined the Marines, his tour of duty took him to Okinawa, The Philippines, and Hong Kong to name a few. Don often regaled stories of his time on Okinawa. After his overseas tour he returned home on leave in October of 1962, just in time for the Columbus Day Storm. He and his father were at the top of the Space Needle when it hit. While on leave Don met Judy and it was love at first sight, as they were engaged 10 days later. Their engagement would last for 14 months while Don finished out his tour in the Marines. They were married on March 7th 1964. After his time in the Marines Don returned to Olympia and went to work at Millers Department Store. He started as a clerk and in six months was promoted to    assistant manager. Don and Judy moved to Portland, OR in July of 1965, where he managed the Millers store until 1972.

Don went to work for Safeway on December 1st 1972 and worked there for 30+ years. Don enjoyed his work there; he worked as a cashier, frozen food manager and night stock manager. But his favorite job was one that had no official title….. #1 Shoplifting Catcher. Don was very good at catching shoplifters and always was eager to share the story of the day at the dinner table. He would make his family guess who (a man or woman), what they took and where he caught them. There were stories of foot chases, being hit and kicked once or twice and he even had a knife pulled him.

Don enjoyed years of volunteer service in his community. He served in his Church as a Sunday school teacher, Bible study leader, Head usher, on the Church Board and one of the founding families of Sonrise Church of God. He served on the Board of his Home Owners Association. He Volunteered at St Peters Hospital with the Mended Hearts organization. He coached the women’s softball team at church.

Don had several hobbies. He enjoyed cheering on his favorite sport teams; The Seahawks, The Mariners and Washington Huskies. He loved spending time with his grandchildren, attending their sports, plays or concerts at school and church. Don and Judy enjoyed RVing and had an RV lot at Ocean Shores for     several years. The ocean was a fun place for Don; he would go clam digging, crabbing, and go on walks looking for agates. Don and Judy were also on a bowling league together. For a few years the family lived on acreage where Don was in his element, raising pigs, rabbits, driving a tractor and cutting wood to sell. Don starting collecting Coca Cola memorabilia over 25 years ago, and enjoyed time with Judy at bazaars, garage sales and antique stores searching for the next treasure for the collection.

Don enjoyed family gatherings and hosting church potlucks at his home. You could always count on a bowl of clam dip or pot of Hobo Soup. During a few of the church events Don and Judy were pleased to host Baptisms on the lake where they lived.

Don and Judy were married for 41 years until Judy’s passing in 2006. Don is survived by his children Eric (Rhonda) and Heidi (Lee), his sisters Martha (Glen) and Peggy (Denny), 6 grandchildren, 3 great grandchildren, and several nieces and nephews. He was preceded in death by his grandson.

On any given day his children could expect a call from him saying which war movie he was watching, the current score of Mariners or recap of the last play of the Seahawks even though you were watching it simultaneously.

Gardening was a favorite hobby of the past few years. He was extremely proud of how many cucumbers he could grow in a season and would call his family every day with the updated count; Last year’s total was 143! Don enjoyed visits with his neighbors, he would sit in his lawn chair waiting for someone to pass by, but from what we hear sometimes he napped and would miss a visit. But by far, his favorite past time of all was telling stories embellished or real to anyone that would listen.

A routine part of his week over the last ten years was to go to Safeway and Columbia Bank. He said he was grocery shopping and banking, but it was more about visiting with people he knew and cared about. He would roll up in his Ford Mustang, wearing his leather Marines jacket no matter what the temperature. He consistently would lock himself out of his online banking and need to call or stop by the bank to have it fixed. Sometimes I wonder if he did it on purpose to go visit Angie and staff at the bank. At Safeway he    enjoyed visiting with employees he knew and random shoppers, you could always expect him to be at Safeway on Tuesdays and Fridays to buy Lottery tickets. He spoke often of what he would do if he won the big one. On July 4th he hit the Mega Jackpot, his heavenly Father called him