Lina’s Funeral Mass will be held at Sacred Heart Catholic Church (812 Bowker Street SE, Lacey WA) on Wednesday, September 23rd at 10:30am. Due to the pandemic, there is restrictions on the number of persons allowed in the chapel, and overflow will be directed to Hallen Hall. 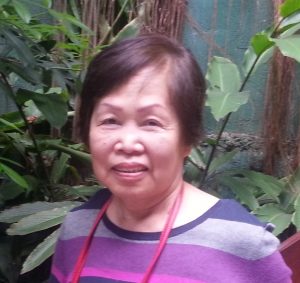 Lina passed away on Thursday, September 17, 2020. She was born May 17, 1938 to Isidro and Genoveva Casanova in Rosales, Philippines. She grew up with three sisters and one brother. She grew up wanting to help people, and she went on to graduate with a Bachelor of Nursing degree from Pangasinan University. Lina began her career as a Registered Nurse at Mary Johnson Hospital in Tondo, Manila, Philippines. She was an exchange visitor for nursing in New Jersey and continued to Indiana where she worked at Wishard Memorial. She then moved to Olympia and worked at Providence Mother Joseph Care Center, where she retired after working 20+ years. In June 1968, she married the love of her life, Gemiliano (Gem) Fucal in Manila, Philippines. Together, they raised three sons.

Lina was a very loving, and caring person. People will remember her kind heart and her selflessness. She wanted to help everyone and was willing to help at any time; if someone was in need, Lina was there for them. She was head-strong, but she always knew what she wanted and went after it. She was the keeper of family-related keepsakes, mementos, photo albums and souvenirs. If family was looking for something, just ask Lina because she probably had it stored away. She was a traveler. Her garden was important to her and she could be found out tending her garden a lot. She was a terrific cook and loved to bowl. She was a member of the Filipino American Community of South Puget Sound and Sacred Heart Catholic Church.