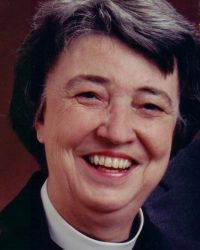 The Rev. Dr. Jean Dalby Clift, caring priest, perceptive counsellor, engaging author, lively speaker, world traveler, and loving matriarch of a growing family, passed away peacefully in her home in Olympia, Washington, on February 1, 2020, at the age of 89. She devoted her life to plumbing the depths of the meaning of love, God, and our place in the world, and helping fellow seekers find their paths, as well.

Jean Dalby was born on February 21, 1930 on a farm outside Naples, Texas. Her parents moved her to Austin at age 3, where she graduated salutatorian of her high school and entered the University of Texas at Austin in 1946 at the age of 16. Despite her active campus involvement (Mortar Board, Varsity Debate, Alpha Delta Pi, Orange Jackets, Texas Law Review, etc.) she completed a six-year combined bachelor’s and law degree program, graduating from the University of Texas law school in 1952. At age 22, she became the only female attorney practicing law with the Houston firm Baker, Botts, Andrews, and Parish. A year later Jean met the love of her life, Wallace Bruce Clift, when he joined Baker Botts. They got engaged on their third date, a week after their first date, and were married within six months of meeting, on January 23, 1954.

During their early years in Houston, Jean and Wallace became active members at St. Stephen’s Episcopal Church, where they were confirmed, and from which four years later they took their lives in a new direction in order for Wallace to attend seminary at the Church Divinity School of the Pacific in Berkeley, California. During their three years in Berkeley, Jean had their first two children (Anne and Lucy), audited classes at the seminary, and started a prayer group. When they returned to Houston in 1960 for Wallace to serve as vicar of two mission churches, Jean became even more involved with prayer ministry, leading several prayer groups. Their son Bruce was born during this time.

Their pastoral experience and lifelong love of learning led both Jean and Wallace to explore new tools for pastoral care. They attended Agnes Sanford’s School of Pastoral Care and began to explore the psychology of Carl Jung. In 1964, Jean and Wallace received a joint grant from the Farish Foundation to study at C.G. Jung Institute in Zurich, Switzerland, where Jean worked with analyst Marie Louise von Franz. In 1966, they returned to the US and moved first to Chicago for three years, and then to Denver in 1969.

At the University of Denver, Jean applied her psychological training to the study of literature, earning a Ph.D. in 1978 with the dissertation Little Nell and the lost feminine: An archetypal analysis of some projections in Victorian culture. She co-founded the C. G. Jung Society of Colorado in 1976, and remained a trustee for several decades.

From 1975 to 1980, Clift was the first non-Catholic to hold the position of Director of the Center for Religious Meaning at Loretto Heights College. She also served as a faculty advisor for Loretto Heights’ University Without Walls program for re-entry students, and taught short courses in religious studies and the humanities. In 1980, she was elected president of the American Academy of Religion, Rocky Mountain-Great Plains Region.

Jean Clift left Loretto Heights in 1980 to establish a private counseling practice. She joined the American Association of Pastoral Counselors in 1982, and in 1987 became the first lay person to achieve the organization’s highest rank of diplomate. She served as the president of the AAPC from 1994 to 1996.

Inspired by the prophetic call to “Comfort, comfort my people, says your God” (Isaiah 40:1), Jean was ordained a priest in the Episcopal Diocese of Colorado in 1988. Beginning in 1989 Jean served on the diocese’s crisis response team, and also headed work on revising the clerical ethics guidelines for pastoral counseling. She held the title Canon Pastor at the Episcopal Cathedral of St. John for ten years, until receiving the title of Canon Pastor Emeritus in 2002.

In addition to her counselling practice and service at the Cathedral of St. John, Jean continued teaching. She served as an adjunct professor of Anglican studies until 2002, first at St. Thomas Seminary and then at the Iliff School of Theology. In 2000, the Wallace B. and Jean Dalby Clift Scholarship Fund, to provide funds for students enrolled in Iliff’s Anglican Studies Program, was endowed by Bette Lanning in recognition of the contributions made by Jean Clift and her husband Wallace.

Jean Clift wrote three books on Jungian dream interpretation and Jungian archetypes in collaboration with her husband Wallace: Symbols of Transformation in Dreams (1984), The Hero Journey in Dreams (1988), and The Archetype of Pilgrimage (1996). Jean’s book Core Images of the Self (1992), dedicated to her Jungian analyst, explored the use of early childhood experiences in counselling. Her final book, The Mystery of Love and the Path of Prayer (2008) described in clear language, with many personal stories, how to live a life full of love.

Both separately and together with her husband, Jean Clift gave numerous lectures, workshops and conference presentations in the community, throughout the United States and abroad, including Australia, Korea, Japan, Great Britain, and Poland. An adventurous spirit and boundless curiosity took them to all seven continents, 93 countries, and every state of the United States.

In 2012 Jean and Wallace Clift moved from Denver, their home of 41 years, to be closer to family in Olympia, Washington. Jean remained professionally active after the move, contributing to an encyclopedia, doing a little counseling, and occasionally assisting with services at St. John’s Episcopal Church of Olympia. Despite losing the love of her life in 2018, Jean Clift retained her humor, her interest in others, her love of family, and her faith in God.

A memorial service for the Rev. Dr. Jean Dalby Clift will be held at St. John’s Episcopal Church in Olympia, Washington, on March 14 at 3 pm. A burial of ashes at the Cathedral of St. John in Denver will follow at a later date. In lieu of flowers, memorial gifts may be made either to the Wallace B. and Jean Dalby Clift Scholarship Fund at the Iliff School of Theology in Denver, Colorado (iliff.edu/give with “Clift Scholarship” in the memo line), or to St. John’s Episcopal Church in Olympia (stjohnsoly.org/).