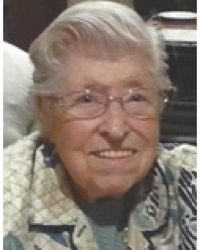 Gleynafa Juanita Bernard, 92, formerly of Wyoming IL passed away on 15 July 2020 at her home in Rainier WA.

Funeral services will not be held.  Internment of her ashes will be at Snareville Cemetary. Arrangements are by Wyoming Monument Company.

Gleynafa was born in Wyoming, Illinois to Laurenze “Lewis” and Mayme (Hager) Noret on 25 August 1927.  She graduated Wyoming  High School in 1945. She married Arlo D. Bernard on 13 June 1951 in Randolph County Arkansas. She worked as a secretary for Walt Smith Sales Barn before going to work as a factory worker at Princeville’s Home Product factory from which she retired.  After retirement she began cleaning offices for several of the businesses around Wyoming IL before her relocation in October of  2005 to the state of Washington where gardening was her favorite past time in the spring and summer with the rest of the year dedicated to “digging up the dead” in her genealogy research.

Memorials may be given to Providence Hospice (WA) or your local hospice provider.