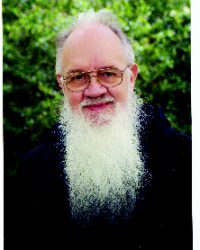 Our confrere, Father Alfred John Hulscher, O.S.B., passed quietly to God the evening of Thursday, 21st January 2016, feast of Saint Agnes, fortified by the Sacraments of the Church. Several of his monastic confreres and his colleagues were with him at the time of his death. His death occurred at Providence Mother Joseph Care Center, Olympia, Washington, where he had been in residence for the past year. John Hulscher was born in Tacoma, Washington, on 15th December 1933. He was the eldest of four children of John Hulscher and his wife Violet DeEtte Hulscher, née Walls. The younger John Hulscher was enveloped in a Benedictine milieu from birth to death. Father Mark Wiechmann, O.S.B., baptized him into the Roman Catholic Church two months after his birth, and on the afternoon of the day of his death he received the Anointing of the Sick from Abbot Neal G. Roth, O.S.B. Until the time came for graduate studies, John Hulscher attended only Benedictine schools: Visitation Academy, Tacoma; Saint Martin’s High School; and Saint Martin’s College (now University), from which he graduated with a B.A. in 1956. The late Abbot Raphael Heider, O.S.B., had invested him as a Benedictine novice on 10th July 1953, and also received his solemn profession of vows on 8th September 1957. Following four years of theological studies at Mt. Angel Seminary, St. Benedict, Oregon, Frater Alfred (as he was now known) was ordained to the priesthood by the late Archbishop Thomas A. Connolly of Seattle on 21st May 1960. At various times Father Alfred exercised his priestly ministry at hospitals and Catholic parishes in the Pacific Northwest, as well as at Saint Elizabeth’s Hospital, Washington D.C., where he was serving as a chaplain intern (1980-1981). Father Alfred was a highly educated man. In 1959, he received a second B.A., this time a B. Ed., from Seattle University. The University of Washington, Seattle, awarded him an M.L. in 1964, and in 1980 he earned an M.S. from Central Washington University. Father Alfred studied German at the Goethe Institute, Munich, Germany (1965-1966) and at the Monterey Institute of Foreign Studies (summer 1967), Monterey, California. In his professional life, Father Alfred touched all areas of our apostolates. He served as assistant librarian, as well as bursar, in both college and high school. He served as high school principal, as chaplain, and as teacher of bookkeeping, Latin and German. Father Alfred taught English in the college, though briefly and later served there for four years as a psychological counselor. Father Alfred was a licensed counselor and continued to counsel privately until shortly before his death. From 1974-1978, Father Alfred was chair of the college’s Board of Trustees; from 1990-2015, he was corporate Secretary for both Abbey and University. A member of the college (later university) and abbey boards at various times, Father Alfred also served as the Abbey’s director of Fiscal Affairs/Treasurer-Procurator from the early 1990’s until 2015. During his more than sixty years as a monk, Father Alfred variously served his community as novice master and junior master and, from 1986-1990 and again from 1998-2015, as its prior. In 1998 he received the college’s Distinguished Alumni Award for Benedictine Service and in 2005 then President David R. Spangler presented him with the President’s Medal. In 2012, the Abbey and University named the newly configured courtyard between the monastery and Old Main for him. Our confrere Father Alfred was not given to spontaneity. His actions were deliberate and well thought out. He was a cautious individual. During the years he was responsible for the fiscal affairs of the community, he always acted with good stewardship. He insured that the needs of the community were met and also provided the possibility of the community’s reaching out to assist the disadvantaged. Likewise, he showed concern for the monastery’s guests, and was very loyal to his longtime friends. There was a period of years when Father Alfred enjoyed spending a day off baking at the monastic cabin on the Sound. His baked goods were always greatly anticipated by his confreres. They were usually perfectly done, as he never deviated from the recipes one iota. In addition to his monastic confreres, Father Alfred is survived by his sister, Louise Hulscher Vargo, his brothers, Ronald and Richard Hulscher, his nieces and nephews, and many colleagues and friends. His monastic community, family and friends, will gather at the Saint Martin’s Abbey Church, Lacey, at 7:30 p.m., on Wednesday, 27th January 2016, for a vigil service. Mass of Christian Burial will be con-celebrated in the Abbey Church at 1:30 p.m., on Thursday, 28th January 2016, followed by burial in the Abbey Cemetery. Abbot Neal G. Roth, O.S.B., Abbot of Saint Martin’s, will be the principal celebrant for the Mass. Father Gerard D. Kirsch, O.S.B., will deliver the occasional homily, and the Monastic Schola, under the direction of Brother Aelred M. Woodard, O.S.B., will provide the music. May the angels lead him into Paradise.