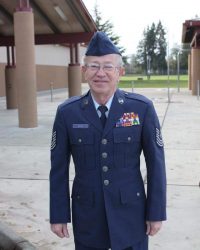 David Walter Wiggen was born June 23, 1945 in Walla Walla, WA. He was adopted into a loving family at the age of 4 along with his younger sister Velma Christine. Father Amil Matthew Wiggen was a career policeman with the City of Seattle. Mother Julia Carey Wiggen was an avid horse jumper.

David entered the Air Force after graduating from Lincoln High School in 1963. He volunteered to go to Vietnam from 1966-1967. He was a veteran of this war and extremely proud of his service to our country. He met Lorraine (Raine) on a blind date in 1968. After breaking up and reuniting, they realized they were meant to be and were married on August 1, 1970. Off to Germany went the newlyweds. In 1971 they welcomed their first child, Matthew Robert. In 1974, along came Carolyn Denice. Later that year they returned to the US. And in the summer of 1987, left Alaska with their 2 kids to retire, heading for home at last. They settled in Olympia where Raine’s parents were. They built a house on the property next door that they had already purchased. After being an accountant for the Air Force for 20 years, David went and got the degree to go with the experience. He ended up doing the same job for the Army he did all those years in the Air Force. When this function was moved to Albany, New York, he found a new path. He worked for the State of Washington at Western State Hospital until his second retirement in 2010.

David loved to play softball, take care of his home and garden, travel with Raine, and always have his family around. He was the largest fan in the crowd for every activity his granddaughters chose. He adored his grand dogs. David was a parishioner at Sacred Heart Catholic Church since 1987 and member of the Knights of Columbus. He was a HUGE Seahawks fan, from the moment they became a team. Even when it was the early 80’s and we lived in Cowboy country. We must have been the only Seahawk fans in sight but sat there at the Dallas stadium on Thanksgiving, cheering on our team. He never wavered in his devotion to them, nor his Mariners. Frustrated at times, but never wavering.

David is survived by his wife Raine, son Matthew Raub and his husband Terry, daughter Carolyn Wiggen and her fiancé Derek McCoy, granddaughters Tera and Julia Geimer, sister Velma Edwards, and many nieces and nephews whom he loved dearly. He will be sorely missed by us all.