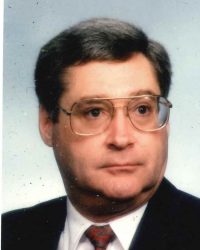 Chuck was born on August 14, 1941, to C. Henry and Alice (Dodds) Secrest in Helena, MT. Chuck graduated from Helena High School, MT in 1959, then attended the University of Montana (UM) where he graduated with a B.A. in Psychology (1963) and a Juris Doctorate (1966). During his time at UM, Chuck met his wife of almost 60 years, Rosemary.  He is survived by his wife, Rosemary, daughter Cheryl Secrest, son March Secrest as well as six grandchildren; Max, Maggie and Teddy with Cheryl, Tate, Cole and Leo with Mark and Melissa.

Post law school, Chuck joined the Montana Department of Highways as an attorney in 1966, where he began his long career in public service.  In 1970, he and his family moved to Olympia, WA, where he joined the Office of the Attorney General for the state of WA.  He became the Chief of the Environmental Section in the WA State Transportation Division, and became an Assistant Attorney General in the Dept of Transportation.

After his retirement, he and Rosemary pursued their long-planned travel goals, spending several years seeing the world, including a six-week journey to South Africa, Botswana, Namibia and Zimbabwe, a boat trip down the Rhine River, two separate trips to Ireland, Paris and multiple trips to Hawaii.  Kauai was Dad’s happy place, and his first destination with Rosemary days after his retirement.

They also traveled to New York City dozens of times over a 30-year period to see the City and their two children, after both had settled in New York after their college graduations.  NYC became a favorite destination, where they enjoyed the museums, theater and restaurants with regularity.  Chuck and Rosemary particularly enjoyed The 21 Club, The Russian Tea Room (a favorite birthday spot for the grandkids) and Les Halles, and had a standing table at the restaurant Chez Josephine in the Theatre District of Manhattan.

Chuck was an avid reader and researcher.  Given that one of his favorite expressions was “if you can read, you can cook,” it was not surprising he became an excellent chef with a vast collection of cook books.   Self-trained (he could read…), his focus moved from Julia Child (her French onion soup was a favorite), to the Frugal Gourmet to Paul Prudhomme (after a trip to New Orleans for “continuing education” for his multiple legal bar memberships – a classic legal boondoggle destination).

He and Rosemary loved their trips to New Orleans, which combined their interests in history, music and really good food.  Dad loved to make Paul’s classic blackened redfish recipe, often substituting one of the many local fish options in lieu of gulf coast redfish.  Red beans and rice was another favorite.  His (unofficial) cooking career expanded beyond New Orleans / Creole staples to include barbeque and grilling, with white king salmon on the grill being his favorite meal for a celebratory family gathering.

While growing up a wilderness sportsman in Montana (fishing, hunting), after eating one wild duck in Washington (he wondered why one should eat fowl if they taste like fish…), he turned his attention to sports, becoming a coach for our junior soccer team.  Without any prior experience or training (“if you can read, you can coach…”), he became head coach of a successful junior soccer team in Lacey, WA, leading the McKinney’s Appliance team (our great local sponsor, complete with a green and white striped jersey, which was reminiscent of the classic Celtic jersey pattern – not that we knew that at the time..) to many great seasons.   Once the junior league teams ended at high school, Chuck had a unique role as a high school soccer coach as well (full time lawyer, part time high school coach) – helping the Timberline High School soccer team for two years in the mid ‘80s during his son’s time at Timberline.

He was also an avid boating enthusiast, and spent much time charting the waters of Puget Sound and the San Juan islands with his family, first with his parents and family on a few three-generational trips, and later with his family and their friends (and ultimate spouses).  Clam digging, oyster hunting and open water fishing were usually part of the experience, as was exploring the local restaurants on the various islands during overnight stops – Victoria, BC was a particular favorite.

Chuck was a devoted husband and father, with a strong commitment to family.  He had a wry sense of humor and was a wealth of knowledge – not a fountain, but a deep well – and was a great teacher and giver of advice.  While not a person of many words, his thoughtful, often brief counsel was always on point.  One of his favorite expressions, when asked “how are you?”, was – “I’m awake, and that’s a plus.”  We had that plus for over 80 years – and will miss him greatly.