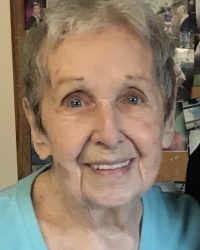 Catherine Mary (Ely) Horne was born in Olympia on January 27, 1926, and died peacefully at her home on May 8, surrounded by family members, a beloved caregiver and her grand-dog. She was 93. A lifelong Catholic and proud Democrat, Catherine was appreciated by her many friends for her unabashed opinions, quick sense of humor and spirited personality.

She attended St. Michael school and Olympia High School, graduating in 1943 and going to work for the Employment Security Department in the old Capitol Building. After the war ended and the troops returned home, she met and married Army infantryman Donald K. Horne, a carpenter who built a one-bedroom home for them in the South Bay area. By the time their third child was born they realized they needed a larger home and purchased five acres on Sleater-Kinney Road, where Don worked day and night to dig a basement and a well. When their twins were born, the family was living in the basement while the upstairs was being built. In 1957, Catherine went to work as secretary to the principal at North Thurston High School. She loved the job and all the students, teachers, administrators and support staff. In 1960, the school yearbook was dedicated to her, an honor for which she remained deeply proud her entire life. In 1965, her youngest child was born. After a maternity leave, she took a new position with the school district but missed the contact with students. She retired in 1984.

She was preceded in death by her husband; brothers Alfred and Vincent; three sons, Tim, Bruce and Jeff, and a great-great grandson, Trevor.

She is survived by three children, Donald Horne, Janet Horne Henderson and Thomas Horne; six grandchildren; seven great-grandchildren and three great-great grandchildren.  A rosary will be said at 8:30 am Thursday May 16 at Sacred Heart Catholic

Church in Lacey, with Mass at 9 am, followed by a reception at the church’s fellowship room. Interment  will follow at Calvary Cemetery.