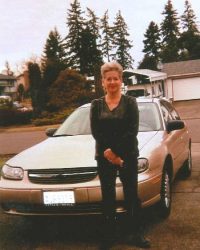 Carol Mary Anne Byerly, 75, homemaker, passed away in her Olympia residence on August 18, 2019 of heart failure. She was born on January 11, 1944 in Vancouver B.C., Canada to Alva George Pero (Father) and Margaret Elizabeth McKay (Mother). Both are deceased.

December of 1964 she married John R. McGaugh. Where they had and raised two boys, Michael T. McGaugh and Jeffrey S. McGaugh.

She was preceded in death by her son Jeffrey McGaugh on February 2016. Of which he had two children, Janai and Koa.

Mrs. Byerly is survived by her son Michael T. McGaugh, her two grandchildren, Janai and Koa McGaugh and her sister Dolores Woody.

She requested no service upon her passing, and per her request her remains will be taken to Westport, WA with the remains of her son, Jeffrey to be spread by her remaining son with a small family gathering at a later date.