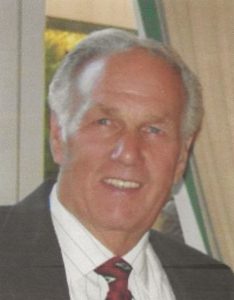 Barry Robert Bridges passed away the evening of Aug. 28, 2021, at St. Peter Hospital in Olympia, Washington, with his daughter by his side.

Born Oct. 16, 1935, in Long Beach, California, to J. Wayne and Gladys (Howard) Bridges, Barry had one sibling, a sister, Carol Lee Coy. In July of 1961, Barry married his beautiful bride, Gaye, in Fairbanks, Alaska, a union that would carry on six decades!  Not only did Barry gain a wonderful mate, but he happily and proudly adopted her two young sons, Walter and Scott.  In October 1962, their daughter, Tracey was born.

Barry started working at the young age of nine, with two paper routes. When he wasn’t delivering papers, he was working at the dairy close by. He was always on the go. In true Barry fashion, it was time to move up to something bigger and better, so at the ripe old age of 16, he bought his first work truck, using cash and his palomino horse as payment.  He was an independent trucker in California,     hauling tomatoes.  In 1955 his adventurous spirit won out, he sold everything, and headed up the Alaska Highway to Fairbanks looking for construction work. This was one of many trips he would make up the ALCAN.  Barry had a variety of different jobs in Alaska, mostly driving truck and construction work. At one point he even worked at a bakery! He was a devoted employee, mostly self-taught, talented, and well liked. In 1975 Barry met Doug Bloom in North Pole, Alaska, where they both were employed by the same construction company. Barry and Doug’s 26-year business partnership commenced in Anchorage in the late 70’s, establishing D & B General.   Their talent and determination took them all over the state of Alaska, from various places above the Arctic Circle, out west to the Aleutians, down to southeast, and many points in between. Their adventures working remotely in Alaska were something most only dreamed of doing. They built runways, bridges, roads, and buildings in some of the most remote, unforgiving terrain in Alaska. In 1989 Washington was calling so off they went to Rainier. They formed Rainier General Development, building well over 400 homes and other buildings. Although Barry retired in 2005, he and Gaye stayed busy with other business ventures.

Barry enjoyed exploring. He even tried his hand at gold mining around Dawson City, Yukon. He took many wonderful trips in the western states on his Harley with his wife and friends. He liked riding Harley’s, snow machines, golfing, scuba diving, and building things. He had a love of old cars, especially model A’s and T’s. He had a close circle of friends. They continuously found ways to amuse themselves by pulling pranks and practical jokes on each other. Laughter was abundant when Barry was around. He just made you smile.  Barry enjoyed the simple things in life, too, like dogs, kids and quiet early mornings.  Barry was a mentor to many, a teacher, a leader, employer, a friend, and he was fair. He was the guy you went to for advice. If you were 20 years or more his junior, you were affectionately referred to as “kid”. He was a     wonderful provider for his family, a devoted husband and father. He loved his wife, kids and grandkids    unconditionally.  He glowed when the subject of grandkids came up.