Due to the pandemic, Funeral Mass at Sacred Heart Catholic Church will be family only. Graveside to follow at Woodlawn Gardens, Lacey WA.

Today, on December 31st, 2020, we are mourning, remembering, and appreciating the life of our brother Gregory Rosario, Son of Ester and Fred Rosario, Brother of Florann “Ann” and Fredrick “Freddie” Rosario, Husband of Karen Rosario, Father of David Rosario, Step Father of Brianna and Zackery Carr, Grandfather of Austin Gallup, and Uncle of Wilfred, Jasmine, Alex, Roman, and Justice. Greg was born on October 1st, 1969 in Fort Hood, Texas as the first child of Fred and Ester. They were an active military family at the time, so they made way around the world for twelve years of his life, until moving and settling in Olympia, Washington in 1981. He met Karen Miller in 1992 and they started dating in 2000. A year later, around the age of 31, they would move in together, along with her two children Zackery and Brianna Carr. Greg and Karen were married on September 27th, 2001. The next day, their son, David Rosario was born. They became grandparents to Austin Gallup in 2012, whom would make such a large impact on Greg’s life, helping him to hold onto his life stronger, so that he could be the best

grandfather for her. Along with his wife and children whom he is survived by, Austin will endlessly miss her Papa.

Growing up, Greg acted the part of the big brother to Ann and Freddie, holding them and playing with them when they were young. Greg also bonded with his uncle of the same name whom was just a couple years older than him, bonding over music and playing guitar. As an adult, Greg worked at numerous restaurants, most notably Applebee’s and Hawks Prairie, the latter of which he and his wife had worked for many years together. In his spare time, Greg loved to go fishing with his father and relax in the sun. After retiring, he would spend most of

his time watching TV with his son, and later, his granddaughter. Greg
made an impact on many people’s lives at home and at work. It was said by a former coworker that he was so dearly close to their heart, just from being the loving and exciting person that he was and will forever be remembered as.

This year in 2020 Greg and Karen celebrated their 19th anniversary, along with his 51st birthday. He had a very fulfilling life, aside from his illness, and enjoyed the time he spent with his family. Our lives are full of memories of Greg, such as the days he would tell his son when he came home from school “You smell like outside”, the hugs and kisses goodbye to his wife, playing games and watching videos with his granddaughter, the constant tough-love-reminders to the kids to do their chores, breakdancing with his little brother in their younger days, and karaoke nights with his sister. Greg was a fun, loving, and passionate man with such a unique spunk that many of us have embraced throughout the years, but of course with every yin, there is a yang. The tough love, the laughter, the tears and so much more that Greg left with us will always be treasured in our hearts. 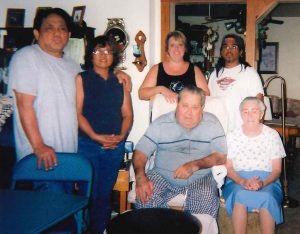