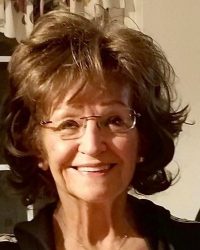 Betty’s family moved to Seattle, Washington when she was a child then later moving to Bellingham where she attended Bellingham High.  She began her first and most passionate career in 1959 becoming an amazing mother to David (Terri) Vopnford, Kenneth (Kimberly) Vopnford, Karen Barker, Jacob (Janie) Vopnford and Christopher (Dena) Vopnford.  While living in Mount Vernon, Betty met the love of her life, Richard Noahr, in 1969. They married in 1972 blending their families with the addition of David Noahr and Kelly Reider.  Richard and Betty grew their family even larger with the arrivals of Kristina (Barry) Sharp, Karri Phillips and Jason (Lorrell) Noahr; eventually settling in Lacey.  Betty retired after 29 years from her second career as a computer technologist at the Washington State Department of Revenue.

Betty loved baseball whether it was teaching her son how to pitch, watching her granddaughter play softball or rooting for the Seattle Mariners. Betty was a franchise long fan of the Seattle Seahawks, often hosting weekly football “parties”. She also loved being a grandmother, dancing, camping in the outdoors, the ocean, train trips, birdwatching and listening to the music of Elvis Presley and Jim Reeves.

Betty didn’t know a stranger and was the most caring, compassionate, graceful, creative, fun-loving, goofy, smart, beautiful, strong, amazing person anybody could ever know. If she was a mother to one; she was a mother to 100. Betty was a wonderful wife, daughter, mother, mother-in-law, grand-mother, great-grandmother, sister, aunt, sister-in-law, and friend.

As a two-time cancer survivor, Betty lived by the mantra, “Have faith, believe in miracles, never give up”.

In lieu of flowers, her family requests that you share your favorite memory of Betty in the online guestbook.