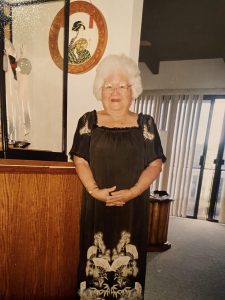 Beatrice Fumiko Correa, age 98, passed away peacefully on Thursday, September 10, 2020, at Roo Lan Healthcare Center in Lacey, WA. She was born March 7, 1922, in Honolulu, Hawaii, to Iwaki and Masayo Watanabe.  She was the second oldest of seven children.  She helped her father manage a fishcake factory and lunch wagon, and it was there that she met her sweetheart, Walter Correa Sr. They were married on June 17, 1940.  They raised four sons and one daughter in Manoa Valley.  They moved to Pupukea, the north shore of Oahu, and then on to Waihiawa.  Eventually, the family moved to the Big Island of Hawaii in 1970 where Beatrice was heavily involved in the St. Michael’s Catholic Church in Kona as well as volunteering at the police department, where two of her sons served.  She was an accomplished seamstress and that  had been her career and deep passion for many years.  She was never happier than when she had a needle and thread.  She worked at the Garment Factory downtown, and was most often found in front of a sewing machine, in her usual rhythm, just stitching away.  When the store closed, she continued to sew for the entire community, as she was a master of her craft.  There was no limit to what she could make; she made anything from a simple aloha shirt, to extravagant wedding gowns.  And many times she would do it all, for nothing more than a simple “thanks”.  She was her own entity and had become a legendary seamstress in Kona, known and loved by many.  She enjoyed traveling and had taken many journeys throughout the years all around the globe.  She also loved taking trips with her sister, Sechan. In 2004, she left her Hawaii home and moved to the mainland.  She spent the rest of her years in Washington State with three of her four sons and their families.  She continued to volunteer her time and sewing talents with the Sacred Heart Catholic Church in Lacey, Washington as well as the St. Peter’s Hospital, sewing rehab pillows for cardiac patients.

Her life was one of service.  Nothing made her happier than being able to create or give in some way.  She had an unwavering faith that was truly inspirational.  Her hands were never idle and they either had some fabric or a rosary in them at any given time.  She is remembered for her countless creations, her signature sushi, her vast love for the Catholic Church, and her steadfast generosity.  She will live on in our hearts but will be missed immensely.

Beatrice’s final resting place will be in Hawaii.  Her urn will be buried at the Mililani Memorial Mortuary on the island of Oahu and a small service will be held at a date to be determined.  The family would like to extend their deepest thanks to the staff at Roo Lan Healthcare Center for their love and dedication shown to our beloved Beatrice.

Condolences may be sent to: