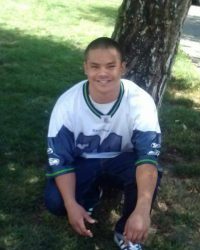 Wilfred “Willy” Rosario , 25, passed away Monday, February 5, 2018.
He was born to Wilbert Lee Kimbrough and Florann Furuc Rosario on Wednesday, January 20, 1993. Willy had many passions; fishing, painting, photography, music of all genres, as well as being an aspiring skateboarder.

Although he left us too soon he had many accomplishments and dreams. At the age of 10 he won the Nisqually Valley Moose Fishing Derby. At 16 he was a finalist at the original Yelm Skate Park and was so excited about his prize of a dozen Krispy Kreme Doughnuts. When Willy saw a child, he was instantly gentle and protective. He loved children and in return they trusted him. He was especially protective of his siblings Jaeli and Roman, often spending quality time with them playing video games with Roman and drawing and listening to music with Jaeli, he always wanted a family of his own.  Family and friends remember him with his big smile, always welcoming and happy to see them. Willy was most proud working with his dad and learning the construction industry with a dream of leading a team of his own one day.

Willy is survived by his father, Willy Kimbrough, stepmother Jaime Kimbrough, sister Jaeli Kimbrough, his mother, Florann Rosario and Jay Farmer (partner), and brother Roman Farmer. He is also survived by his grandparents; Fred and Ester Rosario, Will and Maria Kimbrough, Rick Christel, and great-grandmother Nadine Christel, along with many aunts, uncles, and cousins.