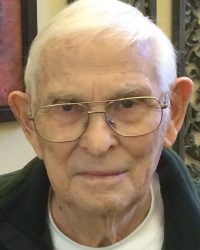 Walter R. “Walt” Chance passed away August 26, 2020 in Olympia, Washington at the age of 97.  Alzheimer’s caught up with him.  Walt was born April 4, 1923 in West Seattle in the home of parents A.B. “Burton” Chance and Florence (Boswell) Chance.

Following WWII US Army service, Walt graduated from the University of Washington.  An accomplishment made possible by the GI Bill.  He earned two Masters’ Degrees from Oregon State University.  His teaching career commenced in Tenino, Rochester, and Kelso High Schools. For 33 years Walt taught at Olympia High School, botany was his favorite subject, and he chaired the Science Department. He famously greeted all students as “scholars.”

Prior to WWII he was a Mt. Rainier fireguard. As a teacher, he returned to the National Park Service as a seasonal Ranger Naturalist in Glacier National Park and then Olympic National Park.  Walt enjoyed 25 summers in the Hoh Rain Forest.

Walt was an avid backpacker.  He climbed Mt. Rainier and Mt. Olympus.  In retirement he hiked in the Olympics, Grand Canyon, and long sections of the Cascade Crest Trail often as a solo hiker.  He was a snow skier; proudly one of the oldest on the slopes.   In his early 90’s he was still riding his bicycle.

Due to pandemic restrictions a gathering is postponed.  Modest contributions to wilderness or educational organizations, or Christ the Servant Lutheran Church of Lacey would be fitting in Walt’s memory.