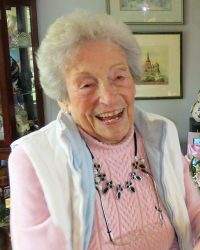 She was born to Jacob and Frances Dietz, March 4, 1917, in Crofton, NE.  The family moved to Seattle in 1922 where she graduated from West Seattle High School. She attended Yakima Valley College and UCLA.

They made their home in Selah, WA for 20 yrs. before moving to Olympia in 1977. Virginia worked as a Senate Tour Guide at the Capitol for 15 yrs.

She was a member of the Olympia Country and Golf Club and played golf until she was almost 90.  Virginia and Charles took many golfing trips all over the world including old St. Andrews in Scotland and to New Zealand.  They also enjoyed cruising. She enjoyed painting, traveling, sewing, going to Las Vegas and Reno, bridge, card games, and her family.   In the last 5 years Virginia and her daughter Lynne planned trips to Reno 4-5 times a year.  She was a very independent woman and still lived in her own home in Olympia and played bridge 1-2 times a week.

Funeral services will be held at Sacred Heart Catholic Church in Lacey Feb. 16, 2018 at 9:00am.  In lieu of flowers make donation to St. Peter Hospice and Homecare.