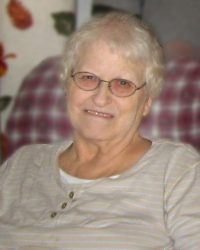 Verla Mae (Muffler) Burk passed peacefully from this life with family near her side on August 30, 2018, in University Place, WA. at the age of 82.

Verla was born the 6th of 8 children to John and Rachel (Jensen) Muffler on September 5, 1935, in Jerome, Idaho.

Her first marriage, to Lewis Sheppard in Nov. 1952, ended with divorce but gave to Verla her first beautiful daughter. Then, on May 1, 1955, Verla married Chester “Chet” O. Burk whom she met in Jerome.  They would celebrate 48 years of marriage together with two more lovely daughters joining their family. The family moved to the Puget Sound region in 1965.

Verla delighted in spending time with her family and took the opportunity to have grandchildren sleep-over on the weekends so she could spoil them. Camping was a favorite pastime for both Verla and Chet and they regularly brought the grandkids on these adventures as well.

She became active in The Church of Jesus Christ of Latter-day Saints in her later years, appreciating the blessing which came through this association.

Verla was a hard worker, which was demonstrated while employed as a Certified Nursing Assistant, helping the aged in various care facilities over the course of more than 30 years.

With the passing of Verla’s husband, Chet, in 2003 she adamantly vowed she would never marry again but that thinking was reversed when she married Stan Bell of Soap Lake, WA in May 2006. They spent nearly 5 years together before Stan’s passing in 2011.

Those who knew her best in life considered her a good friend.

She is preceded in death by her parents and her husbands, 3 sisters: Naomi Luchetti (Louis) of Half Moon Bay, CA., Ethel Sorenson (Glenn) of Layton, UT. and Aleda Muffler; and also 3 brothers: John of Mayfield, UT., Richard of Idaho Falls, ID., and Larry of Jerome, ID.

A graveside service is scheduled for 11 AM Friday, Sept. 7th at Woodlawn Cemetery in Lacey WA., with a family luncheon to follow at The Church of Jesus Christ of Latter-day Saint meetinghouse in University Place, WA.

In lieu of flowers, please send donations to the charity of your choice.

The family extends a warm thanks to the caring staff at University Place Rehabilitation Center for their dedication and personal efforts to making Verla’s final, sometimes difficult, days as pleasant as possible.