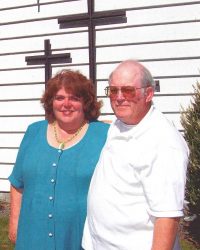 Theodore “Ted” Lyles Puckett, 73, of Aberdeen, was called home unexpectedly to God on February 5, 2018 at his residence. He was born and raised near Oklahoma City, Oklahoma. Ted and his wife Barbara married in 1976. Ted and Barbara met in 1967 when she was running the Busy Bee on the corner of Martin Way in Olympia. They were introduced by a coworker’s husband who was stationed at Fort Lewis that suggested they meet. Ted arrived at the Busy Bee one morning before Barbara had opened and she told him to go to the grocery store and get some eggs and whatever else he wanted for breakfast and that she would cook for him. That day started the several years they would spend together. Barbara fondly remembers that Ted had a van with the bumper decorated in mushroom stickers and he would sometimes drive his fellow soldiers around in it when they were off post. Ted helped Barbara when she was in need of equipment repairs at the Busy Bee and she would in turn cook for him. They were married at the Olympia Lutheran Church on the west side after a sweet proposal and spent a short honeymoon together in Burien and Seattle. Barbara and Ted both worked for Boeing, Ted in Auburn and Barbara in Seattle at the towers during that time. Ted served in the Army during Vietnam and was an engineer. He received a Sharpshooter medal during his time in the Army and was a bridge specialist as well as a blaster powderman. Ted will be missed dearly by Barbara, Barbara’s sister Janet and her husband Tom as well as many other loving family members and friends.

Ted proudly served his country and will be laid to rest at Tahoma National Cemetery in a private ceremony on Wednesday, March 28th 2018.