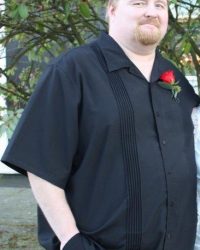 Steven (Steve) Wayne Melby, Olympia, passed away at his home May 5, 2019.  Steve was born in Plentywood, Montana, August 29, 1969, the son of Delbert Samuel Melby, Westby, Montana and Donna Jean Bauer, Eatonville, Washington.  Steve was adopted as a newborn by Delbert and Donna, residing in Westby, Montana.

At age 10, Steve came with his mom and siblings to Washington State, and then moved back to Montana to attend high school.  Steve graduated from Westby High School, a member of the class of 1988.

Steve loved back to Washington after he graduated high school.  He worked various jobs before he became a CNC machinist. In this field, he worked for Olympic Arms for 17 years and Shareway Industries for 5 years, where he was employed at the time of his passing.  Steve also opened and was co-owner of J&S Sporting Goods until 2011. During his time in the gun business he traveled most weekends to gun shows in Washington, Oregon and Nevada where he met many, many friends.

Steve met his wife Cherrie in April 1996 (over a conversation about Jay Buhner’s signature on a hat).  They welcomed their first daughter, MorgAnn Jean, in August 1997. Shortly thereafter, they bought a house in Olympia, Washington.  In August, 2004 they welcomed their second daughter, Makenna Sue. Steve loved his girls more than anything.

Steve enjoyed watching his favorite sports teams, (Mariners, Seahawks, Sonics, and Huskies), listening to sports radio, playing in dart tournaments, and going to casinos.  Steve was one of the biggest Motley Crue fans there is. His favorite member was Nikki Sixx whom he got to meet at a book signing at the University of Washington. Steve made his political views known to everyone, even if they did not want to know them.  Steve also loved Montana and would take any chance he could to go back for a visit.

Steve is preceded in death by his grandparents, George and Hettie Melby, grandmother, Maxine Free and brother Timothy Melby.

Steve’s final resting place will be in Grenora, ND.