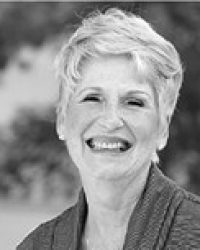 Sandra Darlene Pierson Sandy was born on November 29, 1943 to Staff Sergeant Eugene Mincey Miller and Lois Elizabeth Jones in Paso Robles, CA. A week following Sandy’s birth, Lois gave her away to a childless couple headed North on the train to Coos Bay, OR. Three years later, the couple’s marriage dissolved, and neighbors Oliver and Rae Carpenter petitioned the court to adopt Sandy. In addition to Sandy the Carpenters adopted Jim Soares and hosted and cared for over 70 foster children over the years. Growing up in sunny California, Sandy enjoyed traveling to Disneyland within 2 weeks of the opening in 1955 and a family vacation to Chicago, Ollie’s hometown, the year he won Salesman of the Year. Always a good student, Sandy excelled at St. Mary’s Academy and graduated from Yelm H.S. class of ’61. While waiting tables in a local restaurant, Sandy met a handsome soldier, James Arnold Pierson. Married 40 years, Jim and Sandy had 4 boys within 4 years, including twins! But that didn’t stop her from joining the workforce as a licensed beautician at Miller’s Department Store in downtown Olympia. The 60’s were a time of dancing and parties for the fast-growing Pierson family. There wasn’t enough time in the day, but when there was, it was for television. Always the director of the family, to say she was a critical consumer of the media, would be an understatement. Her passion for politics was only equaled by her love of sports. Before the Mariners and the Seahawks, it was Little League and Soccer Teams, Boyscouts, St. Michael’s Church, camping trips on Lake Trask, and many potlucks and barbecues held at the Pierson home over the past half century. While still maintaining her beauticians license, Sandy worked for Reeves Middle School for 14 years and then for DSHS for 11 years. Retiring in 2002, always the California girl, Sandy became a snowbird at Rainbow Spa near Palm Springs, CA, following the death of her husband Jim in 2003. She was an active volunteer in her new community where friends will miss her Line Dancing Classes. Her family and many friends will miss her sharp wit, energy, laughter and wisdom. She was a force, Mother, wife, and friend she will be missed by all who knew her. On August 22, 2018 Sandy died of a pulmonary embolism thirty days after suffering a stroke. She is survived by her four sons and eight grandchildren: Troy (Dawn), Troy Jr; Trace (Leslie), Oliver, Averie, Allison, and Arden; Todd (Christina), Colby and Kira; and Trevor (Michelle), Aubrie; four great grandchildren and brother Jim Soares (Joanne). “Thank you for all of the well wishes cards and flowers. Sandy really appreciated seeing them in the hospital. A hearty farewell to all of her old friends, new Rainbow Spa friends, and her dear friend, Allan Jacobsen for his warmth and companionship.” A celebration of life will be held September 22, 2018 at 2:00 pm at Woodlawn Funeral Home in Lacey, WA.