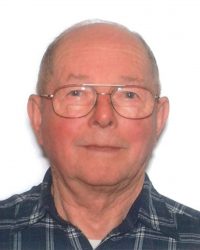 Richard Leslie Martin was born on May 14, 1924, at home in Rainier, Washington to Mark and Martha Martin. He had an older brother Don and a sister Joy.

Richard “Dick” spent his childhood in the Rainier area and early on showed himself to be a hard- working, ingenious young man with many talents and interests.  He enjoyed friends and family.

In 1944 he met his love, Ruby Shultz, and they married and had two cherished children, Bill and Linda.  During their marriage, Dick worked as a bulldozer operator as well as running their family farm with Ruby. Their life was one of hard work, constancy, and devotion to their family and each other.

In 1968 Dick lost his love Ruby to cancer.  As a man of great character, he kept his family together through this enormous loss with love and devotion to his children.

Soon Dick’s life would change again when he married Dawn Fredericks.  They celebrated many years together, participating in several canoeing clubs, beach combing and taking trips with their friends while enjoying their life on the waters of Lake St. Clair.

He is survived by his son Bill Martin and wife, Connie, and his daughter Linda Fredericks and husband, Mike, three granddaughters and four great-grandsons as well as other extended family including Mark and Corrine Fredericks.

Dick remained active in the Faith Lutheran church as an usher, and with his many paddle clubs.  He was a gifted woodworker, and nothing made him happier than to give his beautiful creations to his friends and family.  He filled his life with life-long friends, and centered himself on his dear family.

Dick and Dawn moved from their home on Lake St. Clair to Woodland Assisted Living in August 2011.  In March 2014 Dick moved to Manor Care of Lacey, where he was a funny, wisecracking, beloved patient and friend.  He was brave and resilient as his health declined, and was blessed to have his loving children take tender care of him.

On February 19, 2020, Dick passed into heaven, surrounded by members of his beloved family.  He will be remembered for his humor, his grace, his kindness, his bravery, his talents, and his indomitable spirit. His legacy of love and kindness live on in his family, who will continue to celebrate his beautiful memory.