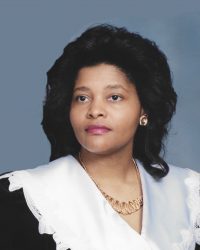 Subscription
Merry FeLinda Tucker Trotter was born on Thursday, September 24, 1959 to Vertia Mae Mitchell and the late Jethro Tucker in Tillar, Arkansas. Merry was raised in the home of her grandparents, Wade Jr. and Clara Tucker. Merry departed this life on Monday, April 15, 2019 at her home; surrounded by her family.
Merry attended BC Prewitt Elementary School, and Tillar High School where she graduated.
Baptized in 1984, Merry served as a devoted Jehovah’s Witness.
Merry met and fell in love with Wiley Trotter and later married. Together they had two children, a son Kevin and a daughter Jennifer.
They bought a home and lived in Selma, Arkansas and later moved to Winchester, Arkansas. After-which, they relocated their family to Washington where she attended South Puget Sound Community College.
As a dedicated and highly decorated employee, Merry held numerous jobs throughout her expansive career. Having worked for the State of Washington for 19 1/2 years, she continued to challenge herself by progressing to federal government employment; which is where she medically retired in October of 2018, as a Health Systems Specialist with the Department of Defense.
Merry Trotter was a doer of great deeds, and lived as though it were her mission to extend a helping hand to all that crossed her path. She will be forever known as having truly embodied the philosophies of the golden rule.
Merry is survived by her loving husband Wiley Trotter of 44 years, of Olympia, Washington. One son Kevin Trotter of Oroville, Washington. One daughter Jennifer Trotter of Olympia, Washington. And her granddaughter Tori Trotter of Lacey, Washington. In addition to her mother Vertia Holmes, and stepfather Theadoe Holmes of Winchester, Arkansas. Her siblings: Shirley Mae Issacs of Texas, Jethro Tucker Jr. of California. Craig Alexander, Debra Dean, Issac Holmes & Leslie Holmes all of Winchester, Arkansas. Theadoe Holmes Jr., Jeremiah Holmes & Andre Holmes all of Washington State. In addition to a host of endearing cousins, uncles, aunts, nieces, and nephews.
Merry’s strength, courage, integrity, kindness, and loving nature will be mightily missed and forever cherished, as she will be loved and longed-for for an eternity.
Psalms 84:2-4
My soul has yearned and also pined away for the courtyards of Jehovah.
My own heart and my very flesh cry out joyfully to the living God.
Even the bird itself has found a house,
And the swallow a nest for herself,
Where she has put her young ones –
Your grand altar, O Jehovah of armies, my King and my God!
Happy are those dwelling in your house!
They still keep on praising you.
Se’lah.