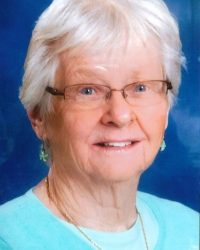 Mass of Christian Burial will be held at Sacred Heart Catholic Church (812 Bowker Street SE, Lacey WA 98503) on Thursday, February 20, 2020 at 9 a.m. with Rosary at 8:30 a.m. Reception at 10:30 am at Woodlawn Funeral Home. Graveside committal is at 11:30am in the Veteran’s section at Woodlawn Gardens Cemetery.

In lieu of flowers, donations may be made to the John D. and Mary K. Swift Family Endowed Scholarship at St. Martin’s University. 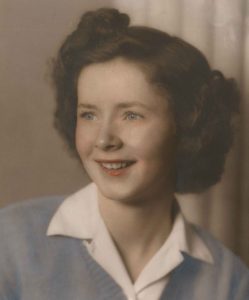 Mary Kathleen Robbins Swift was born to Floyd D. Robbins and Marie Conley Robbins on September 27, 1926 in Olympia, Washington and left our physical presence on February 15, 2020 at the age of 93. In those final days she was blessed to be surrounded by so many of her children, grandchildren and great-grandchildren, who’ve always given her such joy.

This was a woman of many names. As little sisters came along behind Sally and her big brother Floyd, Jr., her name morphed into Sally (one of her little sisters couldn’t pronounce her name and said Mary Kassalleen, and it got shortened from there). When she went to Blessed Sacrament School in Seattle her first-grade teacher, one of the Sisters, insisted she go by her full name of Mary Kathleen. Sally loved all the Sisters at the convent and was honored to be called upon to accompany them to the grocery store, etc., since they always needed a layperson with them when they went out. In later years, many called her Mary Kay. You could always tell if it were a friend or a relative calling on the phone – family called her Sally and most friends called her Mary Kay. She was very delighted when she became a grandmother for the first time and was bestowed the honorific of Grandma Sally.

Sally grew up mostly in Seattle, not far from the University of Washington where her father worked, eventually as a full professor, and loved telling stories of those fun growing-up years, with many walks to Green Lake Park, the library, or to Woodland Park Zoo. But her most interesting stories came from her years at Ft. Worden, Washington, from 1940 to 1945 when her father, a Lieutenant Colonel, was the ordnance officer there; he was in charge of the “big guns” in those now-empty gun bunkers. She loved talking about the “bus” rides to her school in nearby Port Townsend; the “bus” that was really an army truck. She was proud of her Daddy and loved living in officers’ quarters right next to the general’s house and having certain privileges as an officer’s child. Sally and her best friend, Catherine, were the shiest girls at Port Townsend High School so they became inseparable. When Daddy and her brother were both hospitalized in Colorado during the war, Mother (Marie) was frequently away visiting them, so Sally became surrogate mother to her little sisters, running the household and cooking the meals. She became an amazing cook due to all this experience. Who knew it would be practice for feeding a husband and 15 children someday!

Sally attended the University of Washington after the war and then transferred to Seattle University. She was proud of her work on the University newspapers and made unforgettable memories through the Newman Club, a Catholic social club, where she met her future husband, Dave Swift. She always declared that Dave was the most handsome man in the club, which numbered in the hundreds, and all the girls wanted to date him and many of them did. But he turned his sights on sweet, shy, little Sally, the amazing cook who prepared so many of the meals for the Newman Club functions. She never stopped being amazed that he chose her.

Sally and Dave – he always called her Mary Kay – were married at Blessed Sacrament Church in Seattle on May 29, 1948 and quickly proceeded to enlarge the family. She had 15 babies in 18 years. She even had one set of Irish twins who were born only 11 months apart. The poor thing often had several in diapers at once, before they had disposable diapers. She did 6-7 loads of laundry per day during those peak years and was often teased about not having much of a posterior, which she probably wore off going up and down the stairs to and from the laundry room a multitude of times every day.

After their first two children were born in Seattle the family moved to Olympia and made it their permanent home, but she always retained a special love for Seattle.

Sally endured many vicissitudes over the years, including caring for Dave when he was hit by a car and broke both legs. He was laid up in a hospital bed in the living room for months and Sally had to care for his every need, with occasional help from the kids, when they weren’t busy making themselves scarce. Father Ansgar from Sacred Heart Catholic Church would often visit during this time and this is when Sally started frequently advising her children to keep things neat and tidy, in case Father Ansgar should stop by without warning. Around this same time, her baby sister Colleen was dying of kidney failure due to diabetes, and Sally’s baby at the time, Tom, suffered an illness that kept him in Mary Bridge Children’s hospital in Tacoma for a month or so. Sally frequently travelled between Tacoma, to see her baby, and Seattle, where her sister was. Adding to the trauma at that time was the Kennedy assassination. She endured all these things with the patience of a saint. 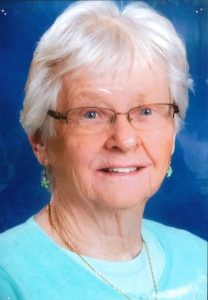 Sally used to love gardening and had quite a green thumb but in later years the deer got all her produce and she finally gave up. When the deer would come close to the house every morning she always made a comment about their ravenous appetites for her tomatoes and lettuce. One of her favorite things was when “The Mountain is Out”. She always made sure no one missed it. She loved her many cousins, including those from the Robbins family who were early settlers in the area. Sally also had an abiding love for the Catholic Church, the Virgin Mary and her Rosary, and the color blue, which just happens to be the color of Mary.

Her large family was her pride and joy, despite frequent comments like, “You know what causes that, right?” or “Can you really take care of all those kids?” She loved her large home on the hill in Tanglewilde and was blessed to be able to stay there until the last few days, as she had always wished.

She was brilliant, witty, funny, and fun, and she and Dave raised a bunch of lively children. She loved it so much when everyone visited, including grandchildren and great-grandchildren, and would often just sit quietly with a happy smile on her face enjoying the repartee, which her children learned from both their parents.

Sally was preceded in death by her husband of 52 years, John David Swift, and four of her cherished children, John, Kathe, Steve (Liz) and Doug (Debbie). Her best idea of Heaven was to be reunited with these five people, plus her parents and all but one sibling who went ahead of her.

In lieu of flowers, donations may be made to the John D. and Mary K. Swift Family Endowed Scholarship at St. Martin’s University.