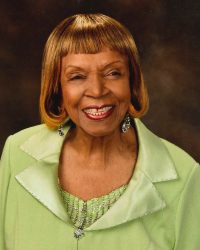 Due to COVID-19 and the resulting restrictions, a small service will be held at St. Benedict’s Church with burial at Mills & Mills in Tumwater.

Linda Harrison is inviting you to Mrs. Wilson’s Service

Dial by your location 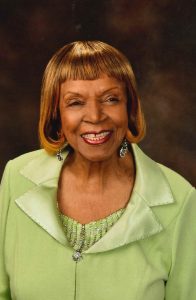 Born on May 6, 1925, to Hosea and Kizzie Jackson, in Philadelphia, Pennsylvania, she married James Wilson on September 14, 1949.  An officer in the U. S. Army, the couple traveled far and wide during the service of their country.

Their son, James R. “Chip” Wilson, was born in France, after a tour in Japan.

It was during their second assignment to Fort Lewis when they wanted to live off-post.  Due to discrimination, they could not find a house or apartment to rent.  After friends interceded on their behalf, a house was procured to rent.  About a year later, a house in Lacey was purchased, despite a petition against them, in addition to the subsequent indignity of having a cross burned in the front yard.

Because of the discrimination focused against them, Mrs. Wilson became involved in the anti-discrimination fair housing movement in the Olympia-Lacey area which included helping other African American families find housing and local resources as needed.

Mrs. Wilson was one of three women who served on the Lacey City Planning Commission; served as commissioner to the Comprehensive Health Planning Commission for Thurston and Mason Counties; and helped form the Thurston County Chapter of the Black Woman’s Caucus (and was honored in 1984 for her pioneering spirit).

The Tacoma Area Federal Executive Award was received by Mrs. Wilson for her work in developing exceptional system and efficiency developments used in the rating of military officers.

Mrs. Wilson proudly served five year as a board member of Seattle’s Paramount Theater, and participated in the planning and implementation of the theater’s restoration and restart.

In 2011, Mrs. Wilson was honored by the City of Lacey by having a plaque hung on a 75-year-old Douglas fir tree that is rooted on the property of the Jackson Family Estates in Olympia.

Mrs. Wilson was most proud of her involvement in two African American women’s clubs out of Tacoma:  The Matron’s Club and The Links, Incorporated.  She was a charter member of The Tacoma (WA) Links, Incorporated, which was organized in 1966, serving throughout the years as a member of all committees and facets, and also held the position of Vice-President.  The Tacoma Chapter was blessed as Mary Wilson served as Vice president, Membership Services Chair, Services to Youth Facet Chair, Co-hosted the 1973 Area Conference, and hosted chapter guest speaker, Oseola McCarty.  She remained an active member until her death.

Mrs. Wilson was preceded in death by her husband, James Wilson, and her sister, Anna Walker.  She is survived by her son, James R. “Chip” Wilson, and many cousins who loved her greatly.