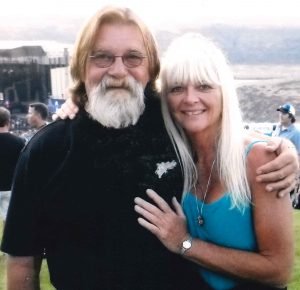 Mark Bernard Thomas, 67, died December 28, 2019, at home with his family by his side. He was born June 7, 1952, in San Diego, California to Grover and Beatrice Thomas. He lived in California his entire youth. He married after high school, having one daughter, April Evans. He worked and learned his trade at San Diego Power and Electric. The family moved to Olympia and, after a few years, the couple divorced. Mark was working for Puget Power, which later became Puget Sound Energy.

A few years later, Mark married again and they had a daughter, Abbey Thomas. In 2013, long after his second divorce, Mark met his current wife, Teri Thomas, whom he married in 2014. They had fun in their seven years together. Their love of music sent them to a huge variety of concerts, some in other states seeing many of their favorite musicians  and artists. They also loved to travel, taking road trips, numerous cruises to exotic places, two of them being blues cruises where they were entertained by forty bands playing on five different stages. Music everywhere, they were in their element. Included as well in their travels were five fun-filled and wonderful trips with friends from work, Harold and Susan Smith, Jerry and Mary Nesbit, Kenny and Sue Densmore, and Steve and Penny Reinitz to Cabo San Lucas, Mexico; South Padre Island, Texas; Hilton Head Islands, South Carolina; and Ocean Shores for the Bigfoot Festival.

Mark loved boating and for years took many trips in his SeaRay Sundancer. When Mark got sick, he gifted the boat to daughter, April, who plans on renaming the boat in his honor. Mark and Terri both grew up at the beach in Southern California so any aquatic adventure was a treat. They loved visiting Scott and Becky on their yacht in Santa Cruz, California.

With so much in common, they were perfect for each other; Mark and Teri considered themselves soulmates.

After a long and fulfilling career at PSE as a service lineman, Mark retired in 2017.