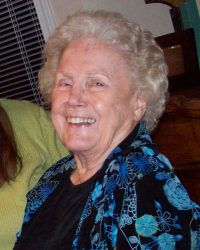 Internment will be at Forest Cemetery, 2501 Pacific Ave SE, Olympia, WA next to her husband Don.

Due to the current pandemic, an extended family gathering, and celebration will be planned into next spring. 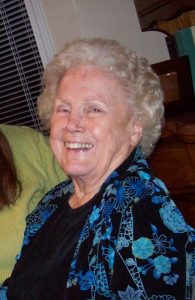 Our Mom, Lorraine V Wilcox, is finally at peace after a 15 year battle with dementia. She was born in Rainier, WA on April 19, 1924 and died in Olympia on June 26, 2020. She grew up in the Olympia area and graduated from Olympia High School class of 1942. Soon after she was introduced  to Don Wilcox, a handsome soldier from Fort Lewis Army Base.  They were married that same year before he was shipped off to war. Upon his return they started their new life in Olympia and quickly became the parents of Lynda, Susan, and Donald Jr, followed by Ronald and Debbie.

Lorraine was a Girl Scout leader in the early years. She taught her girls to camp, build fires and make cowboy stew. She woke her children with a song and filled the home with hugs, music, loud smooches and cheerful whistling. She and Don had many adventures, camping with the kids, fishing in Alaska, trips to Hawaii and lots of golfing with friends.

She was unable to attend college, but we remember the many years she studied accounting in night school classes. Lorraine worked for the State of Washington for 30 years where she made many friends. After her husband Don died in 1985 she continued to work seasonally in the Washington legislative bill room. It was during those years that she began her next adventure learning how to ski, white river rafting, traveling and doting on her grandchildren.

It has been a long slow goodbye for those of us who loved Lorraine. She leaves behind her children, Lynda Wilcox, Seattle, Susi Wilcox (Dick LeMier) , Seattle, Don Wilcox (Cheryl), Olympia, Ron Wilcox (Ellen), Olympia and Debbie (Wilcox) Berentson, La Conner, along with her grandchildren Mark Hukee, J Hukee, Tanya Mackey, Jason Wilcox, Kevin Olsen, Kyle Olsen, Laura Shetlin, Anna Berentson, Madelyn Bersentson and great grandchildren Kylie, Ayla, Eli and Lilly. She has many nieces and nephews that remember her fondly as “Snookie”. She loved you all!

Internment will be at Forest Cemetery, 2501 Pacific Ave SE, Olympia, WA next to her husband Don.

Due to the current pandemic, an extended family gathering, and celebration will be planned into next spring.