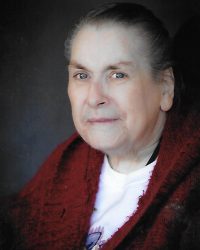 Viewing will be held on Wednesday, July 10, 2019 at 10 a.m. at the Woodlawn Funeral home.  Service will be at 11 a.m. with the burial following at the Woodlawn cemetery.

She was born to the late Florien and Dorothy Henderson, Feb 8, 1934, in Martinez, CA. Pauline graduated from High School in 1950. She later joined the US Air Force, where she met our father Walter.

She married the late Walter Poplawski in 1953, and they lived together traveling the world, courtesy of the USAF for twenty years, before relocating and settling in Chicago, Ill. They separated their ways in 1976, when she moved to Washington. She met and was married to Fred Craney of Little Rock, WA, Oct. 24, 1987. Lola Pauline is survived by three children: Doris Zacher, of Shelton, WA; Andrew Poplawski, of Puyallup, WA; and Kent Poplawski, of Ft Collins, CO. She is also survived by seven grandchildren and 9 great-grandchildren. Lola Pauline was predeceased by her loving husband Fred in 2003.

Lola Pauline was a jack of all trades and accomplished in her motherly duties. She also spent time as a nurse’s aide, she was in the US Army National guard, and she managed the pet department at a department store.

She was immensely proud of her family, and leaves behind nothing but beautiful memories.