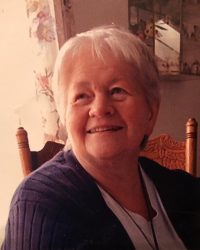 Gravesside Services: Woodlawn Cemetery on Wed., September 25, 2019 at 1:00 p.m. Mrs. Briere will be laid to rest with her loving husband, Lovel Briere.

Janet Elaine Briere, 76, passed away unexpectedly on September 17, 2019, at her home in Lacey, Washington. She was born to William and Gladys Judge on December 17, 1942, in Spokane, Wash.

She entered Mary of the Angels Convent at the age of 13 and graduated from Marycliff High School in Spokane. She continued to pursue a religious vocation as a postulant and novice at St. Claire’s Monastery in Sauk Rapids, Minnesota. Following her departure from the convent, she studied at Sacred Heart School of Nursing, in Spokane, and at St. Peter Hospital School of Practical Nursing, in Olympia.

On June 17, 1964, she met Lovel W. Briere at St. Michael Church, in Olympia. They were married there exactly one year later. Together they had 9 children. In 1987, they were honored as the Knights of Columbus International Family of the Year. They had been married for 41 years at the time that Lovel passed away in 2006.

Janet was preceded in death by her husband, Lovel; her parents, William and Gladys Judge; her sister, Patty Herren; her twin sister, Joan Towner; and three of her children, Teresa, Ben, and Bernie.

She is survived by two sisters, Kathy Stephens (Jim, deceased) of Lacey, and Julie and Dwight Herron of Longview; her children and their spouses, Bill and Jew-Lee Briere of Laramie, Wyoming, Mary Ann and Barry Johnson of Wasilla, Alaska, Lucy and Ira Feuerstein of Chandler, Arizona, Rose and Ron Mathews of Olympia, Washington, Cathy and Jon Martin of Phoenix, Arizona, and Joe and Ashley Briere of Maricopa, Arizona; her 15 grandchildren, Ali and Ani Briere, Taylor and Emma Johnson, Tanner, Kaleigh, and Hunter Feuerstein, Alexandra, Mckenzie, Madeline, and Mia Mathews, and Chase, Amanda, Cody, and Bryce Briere; and numerous nieces and nephews and their children.

Janet was a licensed practical nurse, caregiver, and provider of home health and respite care. She was active in numerous volunteer and religious organizations throughout her life. Many of her activities revolved around her membership at Sacred Heart Catholic Church in Lacey. She also enjoyed gardening, participating in activities at the Lacey Senior Center, and keeping up on the interests and hobbies of her children and grandchildren.

Janet was a strong woman who shouldered a burden that no mother should ever have to bear: the loss of three children. In spite of this and other hardships, she remained grateful for all the blessings in her life, including her family, church community, faith, and friends. Her challenges fostered her strong sense of empathy and compassion toward everyone she encountered. She will be remembered for her steadfast commitment to her husband and nine children, her beautiful smile, and her unwavering faith in God