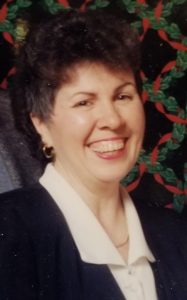 Jacqueline Harriette Gioimo (77 years old) passed away on February 5, 2020 in Olympia, Washington, surrounded by family and friends. She was born to Nicolas and Hazel (Schock) Sparsman on August 15, 1942 in Menlo Park, California. She grew up with two sisters, Dorothy and JoAnn. In 1960, Jacqueline graduated from Central Lee High School in Donnellson, Iowa.

A few years later, she met the love of her life, Thomas Michael (T-Mike) Gioimo., whom she married in November 1966 in Donnellson, Iowa. Together, they raised two sons David Michael and Scott Douglas.

Jacqueline loved being outdoors in her garden or working in her yard. Inside, she enjoyed playing games, especially Yahtzee and card games. She was an avid reader. She would be in front of the television for The X-Files. Neil Diamond was a favorite artist.

Family meant the world to Jacqueline. Spending time with her two sons was important to her. She truly enjoyed her grandchildren and great-grandchild; she loved spoiling them. She was a kind-hearted soul, with a lot of compassion. She was a very loving, giving person, who was very selfless with her family; she would do anything for her family.

Jacqueline was preceded in death by her loving husband of 54 years, Thomas Michael (T-Mike) Gioimo, and a sister Dorothy Overton. She is survived by her two sons David Gioimo and Scott Gioimo, her sister JoAnn Dunmire, four grandchildren and one great-grandchild.

Memorial donations are suggested to the Cancer Society of America or your preferred cancer charity in Jacqueline’s name.

Jacqueline will always be loved and missed. The family will always carry her in their hearts.