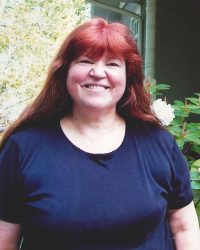 Ilona Toni Hardgrove was born in Budingen, Germany on April 13th, 1951. Her parents were Wilhelm and Herta Hugel. She has a brother and sister, Berndt Hugel and Ellen Tillman. While in Germany, she went to school for and became a registered nurse. She worked as a nurse in Germany for 25 years.

After her husband’s military career was finished, they settled in Olympia, WA in 1985.

Ilona and her husband enjoyed over 46 years of marriage together.

Due to a sudden illness, Ilona passed away on February 26th, 2018, at St. Peter’s Hospital in Olympia, WA.

Ilona is survived by her husband, son, daughter-in-law, step grandson, and Jonas Hardgrove (only grandson – apple of her eye!!), brother and sister and their families in Germany.