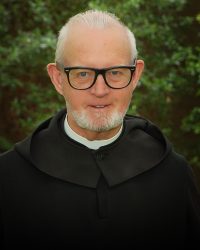 Young Jerome’s primary education was mainly in parochial schools in Oregon and Washington. He entered Saint Martin’s High School in 1942, and graduated from Saint Martin’s College (now University) with a B.A. in philosophy in June 1950, serving as his class valedictorian. In 1956 he earned a B.E. from Seattle University. He later went on to earn three Master’s Degrees: from Register College of Journalism, Denver, in Journalism; from Tufts, Boston, in English; and from Monterey Institute of International Studies (now a part of Middlebury College) Monterey, California, in French. He also did academic work at the University of Washington, University of California, San Diego, and the University of Paris.

Prior James Piotrzkowski invested Jerome as a novice on 7th September 1947, giving him the religious name Timothy, and received his first vows on 8th September 1948. On completion of theological studies at Mount Angel Abbey Seminary in 1954, Frater Timothy was ordained to the priesthood by Archbishop Thomas A. Connally on 15th May 1954.

Following his priestly ordination, Father Timothy did some work in parishes, but mostly he was an educator, teaching classes in English, math, religion and French at Saint Martin’s High School until its closure in 1974. He then continued his work as a high school instructor in the Bahamas, Los Angeles and San Diego for nineteen years more.

Father Timothy loved teaching. In addition to his work in the classroom, he organized many educational trips to EUrope for his students. An avid tennis player for many years, he also served as their tennis coach for a period of time, resulting in many award-winning players.

When he retired to the Abbey, Father Timothy initially devoted himself to tutoring some of Saint Martin’s University’s foreign students in English. He was an avid walker, until the years began taking their toll, and a devotee of sports, especially tennis, and enjoyed being current, watching them on television, and discussing them with like-minded confreres. In retirement, he was also afforded the leisure to re-visit classic works of literature.

Father “Tim” was a regular presence at the monastic office, the conventual Mass, and all community events. He had a great love of life, and an interest in sharing the triumphs of his confreres, whom he encouraged, both in their monastic pursuit of God, and in their various assignments and interests.

In addition to many friends, Father Timothy is survived by his monastic community and family members.

On Tuesday, 17th July, his remains will be received at the Saint Martin’s Abbey Church, Lacey, at 7:30 p.m., where there will be a Vigil Service. Mass of Christian Burial will be con-celebrated at the Abbey Church at 1:30 p.m. on Wednesday, 18th July 2018. The Reverend George J. Seidel, O.S.B., will be principal celebrant and homilist at the Mass. Burial will follow in the Abbey Cemetery.