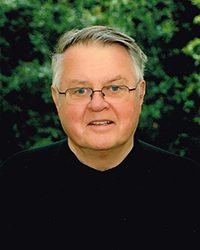 Fortified by the Sacraments of the Church, our dear confrere, Father Thaddaeus Raymond Arledge, O.S.B., passed to God at Providence St. Peter Hospital, Olympia, on Wednesday of Easter Week, 8th April 2015, as a result of injuries sustained in a fall on Easter Sunday afternoon. Raymond Arledge was born to Thomas and Martha Ann (nee Pohl) Arledge in South Prairie, Washington, on 7th July 1927. He was inducted into the Army Air Force in September 1945, and it was while stationed with the Army Air Force in Fairbanks, Alaska, in 1947 that he was received into the Roman Catholic Church.
Young Raymond entered the monastic novitiate at Saint Martin’s on 10th July 1949, and the late Abbot Raphael Heider, O.S.B., received his first vows on 11th July 1950. Following the completion of his theological studies at Mount Angel Seminary, St. Benedict, Oregon, he was ordained to the priesthood by The Most Reverend Thomas A. Connolly, Archbishop of Seattle, on 19th May 1956.
Father Thaddaeus received his early education in Tacoma schools. In 1952, he received a Bachelor’s degree from Saint Martin’s College, now University. He did graduate studies at St. Michael’s College, Toronto, Canada; the university of Hamburg, Germany; Saint John’s University, Collegeville’ and the Monterey Institute of Foreign Studies, Monterey, California. It was from this last named institution that Father Thaddaeus received a Master’s degree in 1970.
During his professional life, Father Thaddaeus was engaged in both the field of education and parochial work. Father Thaddaeus was a German instructor, as well as a residence hall counselor, at Saint Martin’s College for many years; after his retirement to the Abbey he occasionally acted as a Latin tutor being an almost life-long Latinist. He worked extensively in parishes in the archdiocese. Among others, he served at Assumption, Seattle; Queen of Angels, Port Angeles; Visitation and Holy Rosary, Tacoma; and St. Joseph’s, Elma. From 1995 until his retirement to the Abbey, he served as chaplain to the Benedictine nuns of the Primitive Observance of Our Lady of the Rock, Shaw Island, Washington. At various times he also served as moderator of such Catholic organizations as the Saint Maltin’s Mothers’ Clubs; the Oblates of Saint Benedict; the Saint Vincent de Paul Society; and the Young Ladies Institute. From 1974 through 1976, Father Thaddaeus was a member of the Archdiocesan Priest’s Council.
Within the Abbey, Father Thaddaeus’ assignments had included that of assistant retreat manager, Abbey guest master, and socius to monks in formation.
Our late confrere was both a Latinist and fluent in German. He possessed an inquiring mind. His earliest translation from the German (unpublished) was a work on Christian art by the monk of Maria Loach, Germany. Father Thaddaeus’ unpublished Master’s thesis is titled: Goethe und Pietismus (1970). He also authored a book on his beloved Key Peninsula, Early Days of Key Peninsula, which was published in 1977.
For many years, our confrere was a member of the American Association of Teachers of German. An avid block flute player as a young monk, at one time he was a member of the American Recorder Society. A short time before his untimely demise, a second degree was conducted in his honor by the J.T. Quigg Council of the Knights of Columbus, Elma, Washington, in recognition of Father Thaddaeus’ service to the Knights.
Father Thaddaeus was a quiet, thoughtful man, who liked nothing better than reading and researching in his much-loved German. He was someone one could discuss language structures with as easily as things spiritual. During his later years, he found walking great distances difficult. He “walked” the campus, and sometimes beyond, in his own motorized cart as he continued to enjoy the natural beauties of his native state.
His community and friends will gather at Saint Martin’s Abbey Church at 7:30 p.m. on Thursday, 16th April 2015, for a Vigil Service. Mass of Christian Burial will be con-celebrated in the Abbey Church at 1:30 p.m. on Friday, 17th April 2015, followed by burial in the Abbey Cemetery. The Most Reverend Eusebio Elizondo, Auxiliary Bishop of Seattle, will be the principal celebrant at the Mass of Christian Burial. Abbot Neal G. Roth, O.S.B. will conduct the committal service at the Abbey Cemetery.