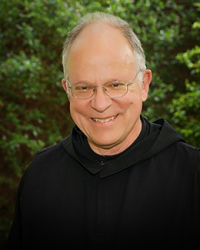 Our long-time confrere, Father Gerard Denys Kirsch, O.S.B., passed peacefully to God at the Abbey sometime during the night of 21st/22nd March, just days short of his 77th birthday. Though his death seemed sudden, Father Gerard had a long history of heart problems.

Denys Kirsch was born to Will and Elaine Kirsch, née Hemen, in Fairbanks, Alaska, on 25th March 1943, thefirst of four sons born to the couple. Father Gerard was predeceased by his parents, by his twin brothers PriorBasil Kirsch of Assumption Abbey, North Dakota, and Mark Kirsch, of Seattle, Washington, and his youngestbrother Stephen Kirsch, also of the Seattle area.

Father Gerard’s early education took place in Fairbanks and East Wenatchee. In 1957, his parents sent him toSaint Martin’s High School. His cousin Father Christopher Abair was a member of the Abbey community at that time, as had been his late great uncle Father George Monda. In 1961 he entered Saint Martin’s College (now University), from which he received a B.A. in 1965. Graduate studies in history were done at the University of Illinois, Champaign, where he earned a Master’s in history in 1970.

In 1965, following college graduation, he was received into the novitiate at Saint Martin’s Abbey by the late Abbot Gerald Desmond, O.S.B. He made his simple profession of vows in 1966. From 1966 through 1969 he studied theology at Mt. Angel Seminary, Oregon, and was ordained to the priesthood in December of 1970 by Archbishop Thomas A. Connolly of Seattle. He said his first Mass at Holy Apostles, East Wenatchee, the day following his priestly ordination. His main exercise of his priestly ministry was as chaplain to the Benedictine community of St. Placid Priory from 1974 until the time of this death.

Father Gerard served the Abbey and University communities in many ways. He taught history in the University from 1970 until his retirement about two years ago. In the Fall of 1978, he was chair of the Humanities Division and also served time as a reference assistant in the school library.

He was a member of the abbot’s Senior Council at various times; was a regular columnist for the abbey’s Oblate Newsletter; was Oblate Director for several years; and served as abbey representative, and at times informal chaplain, at University sports’ events. At the time of his demise, he was Formation Director (postulant, novice and junior director) and since 1980 he had been the official archivest for Saint Martin’s Abbey. For the past several years, he also had offered an early Sunday Mass at the local Catholic hospital.

Our confrere Father Gerard had a passion for history and was a voracious reader. He also had a phenomenal memory, be it information about England’s “Good Queen Bess”, about family and friends, or about colleagues and acquaintances. He was a regular and enthusiastic attendee at all home sports’ events, and enjoyed playing the many pinball-type games available at the students’ Trautmen Union Building. Surely, though, his favorite
place since his time as a high school student was the library. Father Gerard was possessed of a very sweet tooth and oft times opined that one might do well to begin a meal with dessert. On spying some dessert laid out for an occasion, a favorite Gerardian expression was: “Now what have we here.”

Father Gerard was a sensitive individual, and strongly spiritual. He was not usually reticent to express his opinion. He was basically a kind man who cared deeply for family, confreres and friends. He will be greatly missed by his confreres, family, friends and former students.

The funeral and burial of Father Gerard’s remains in the Abbey cemetery will be private. In lieu of flowers, donations in his memory may be made to the Father Gerard Athletic Scholarship Fund care of the Office of Institutional Advancement, Saint Martin’s University, or to a favorite charity.