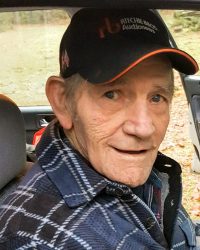 Elden Brown Jr.  (Sonny) longtime resident of East Olympia, WA, with his daughter Brenda by his side joined our Loving Lord on February 18, 2019 at Providence Centralia Hospital, after a beautiful prayer was said  by Chaplain John Capen. He was born on January 2, 1932 to Elden O. Brown and Elma M. Brown in Adna,Wa. He recently celebrated turning 87 years old.

Elden is survived by his daughter Brenda Wilmoth and devoted son-in-law (Mike), his grandson, Jason Wilmoth (Jenene), his granddaughter Amanda Christian (Gregory) and five Great grandchildren, Brandon, Vanessa, Natalie, Corbin and Caleb. He is also survived by his older brother Charles Brown, Shelton, WA, his sisters Patricia Koelling, Bellingham, and Virginia!!! He had many loving nephews and nieces and their families.

He was retired and living comfortably in his home enjoying family and watching Westerns.

When Elden was young, he worked at his parents business 101 Fruit and Feed on Mud Bay Road, and drove heavy equipment and trucks for the business. He also set bowling pins at Adams Bowling Alley in Olympia.  He then worked at Hardel Lumber Company, and transitioned in to driving semi trucks with Rucker Brothers in Tacoma. He went to Alameda, California to have a hand at an ice cream business venture with his brother Charlie.  Upon return he went back to Rucker Brothers Trucking. He was always a very hard worker and trucking was his passion. In trucking he took huge bridge beams and the largest of loads to places that others would not have dared to take. When Rucker Brothers Trucking Company ended, he worked for Olympia Oil and Wood as a mechanic until his retirement. He also lived in Fairbanks, AK with his brother Earl for a brief time during the Oil Pipeline era.  Upon retirement he was always busy around his property and very mechanically inclined, driving his loader and working on this or that. He could figure out how to fix or accomplish tasks he took on.

He was a member of the East Olympia Community Club, Inc. and later after they promoted the all Volunteer East Olympia Fire Department he was one of the first volunteer firefighters along with other family and community members.  He assisted putting in water well for private residents in the community needing the water on the Club’s property.

Elden had a quiet nature, but he always was helpful and generous in times of need.

In his young years, he would like to spend quality time with his family, and even once belonged to the “Toole Creeper Jeep Club” which took his family to exciting and fun places.  He fished the Deschutes River, Nisqually River, Long Lake, Patterson Lake, Black Lake and he took his family camping at the Skookumchuck River, Rife Lake, Soap Lake and various places in the beautiful places in the Pacific Northwest, nature always being present in his life.

He was a very strong man that was steadfast through many obstacles, a man’s man that accomplished many good things in life.  He will be going home to rest peacefully with the love of his life Patricia, and his son. Donations can be made to the Diabetes Foundation or any favorite charity. Please feel free to pay respects at anytime at Deer Creek at Woodlawn Cemetery.  A Celebration of Life Potluck will take place at the Brown’s Home on March 24th, 2019, beginning at 11:45 AM