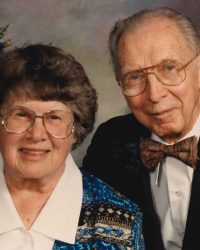 Service will be Friday, February 14th at 09:00 am at Sacred Heart Catholic Church (812 Bowker Street SE, Lacey) Reception to follow. 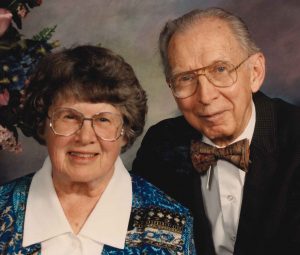 Dorothy Rowland passed away February 8, 2020 at Panorama Retirement Community. She was born July 27, 1920 to William and Mary (Alles) Schneider in Glencoe, Illinois. She received a B.S. in Chemistry from Mundelein College in Chicago and worked as a microanalytical chemist at the University of Illinois in Urbana. In 1943, she and Stanley Rowland, a PhD research chemist, were married and began their almost 60 years of married life together in Philadelphia, where their four sons were born.

In 1956, the Rowlands moved to Cincinnati, Ohio and Dorothy became involved in PTA, Cub Scouting and hospital volunteering. In 1963, the family moved to New Orleans where she worked as a reference librarian at the International Trade Library. She then joined the staff of the scientific research library at the USDA Southern Regional Research Center and, upon completion of cataloging courses, became the paraprofessional cataloger for the library.

Dorothy and Stan enjoyed numerous official trips abroad throughout Europe as well as Egypt while working at the Research Center. In 1984, they purchased a small farm in Tenino, Washington and retired to a much quieter life. It was a whole new world, and Dorothy came to love every aspect of farming. She and Stan raised beef cattle and tended vegetable gardens, flowers and orchards.

When Stan’s health deteriorated, they moved to Panorama in 2001, and he preceded her in death in June 2003. She is survived by their four sons: Paul (Kathleen) of Ashland, Oregon, Thomas (Jane) of Tenino, Washington, James of Sioux Falls, South Dakota, and David of Valparaiso, Indiana; 6 grandchildren and 4 great-grandchildren.

A funeral Mass will be celebrated at Sacred Heart Catholic Church at 812 Bowker Street SE, Lacey on Friday, February 14th, 2020 at 09:00 am. In lieu of flowers, please donate to Sacred Heart Emergency Outreach or a charity of your choice.