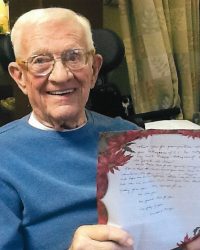 Services for Mr. Redfield on Thursday, September 5th, at River Ridge Covenant Church, 7945 Steilacoom Road SE, Olympia WA. Viewing is a 10:00am, with funeral beginning at 11:00am. Graveside will be at 1pm on Monday, September 9th at Reservation Community Memorial Park (5161 W Wapato Rd, Wapato WA 98951) 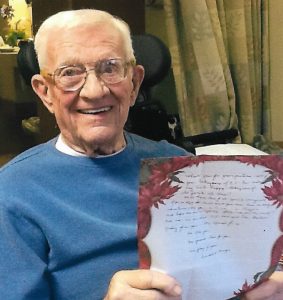 He was wed for 68 years to his wife, Dorothy.  Together they had four children:  Rachel, Charles (wife Tammy), Joye (husband Greg Wilder), and Glenn (wife Carol), and nine grandchildren:  Matthew, Andrew, Nathan, and Jordan (to Chuck and Tammy);  Lauren, Allison, Emily, and John (to Glenn and Carol); and Ryan Wilder.

CE was born on Aug. 9, 1926,  in Aberdeen, WA, to Cavour E. and Agnes Craig Redfield. He joined sisters Barbara and Dorothy, and was followed by a younger sister Arline. Upon the passing of his father (WWI vet) when he was age 7, the four children were sent to live at the VFW National Home for Orphans and Widows in Eaton Rapids, MI.  After the onset of WWII,  at age 16 he joined his mother in Montesano, WA, where he graduated in 1944. He joined the US Army and was sent to the Philippines, serving in the corps of engineers. With the dropping of the atomic bomb in Japan, the war ended and he was then assigned to the Occupation Forces in Japan.

Using the GI Bill, he graduated from Linfield College in Ore., in 1950 with a degree in PE and education. It was there he met his future wife, Dorothy Schilperoort, whom he married in 1951. He later acquired a Masters Degree in School Administration at UW.

His early career included educational positions in Oregon and Washington before he led his family on a 14-year adventure to the Far East. In 1963, he served as superintendent at Morrison Academy, a Christian school in Taiwan. In 1969, during the height of the Vietnam War, he joined the Dept. of Defense schools at Clark Air Base, Philippines.  In 1972, he was the administrator for the Adult Education Program for airmen to complete their high school diplomas. He established 45 Open Learning Centers, averaging a total of over 6,000 students during each term, at airbases in Japan, Korea, Okinawa, Taiwan, Thailand and the Philippines.

In 1977, he accepted a position at the Educational Services District 113 in Olympia, WA, from which her retired int 1988.

CE and Dorothy were active members of Lacey Chapel, leading a seniors Bible study and fellowship group for many years.