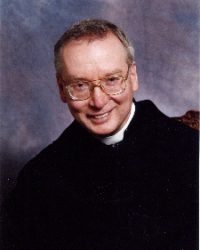 The late Abbot Raphael Heider, O.S.B., invested David as a Benedictine novice at a quasipontifical
Mass on 20th March 1961, giving him the name in religion of Theodore. Brother
Theodore made his simple profession of monastic vows on 21st March 1962. In 1965, on the
Feast of Saint Benedict, he made his perpetual vows. On January 22nd 1967, following the
recent reforms of the Second Vatican Council, he was among the first group of non-ordained
monks to make solemn vows at Saint Martin’s.

For a dozen years, Brother Theodore’s special charge was the Abbey chapel, which he
devotedly kept in perfect order. In the 1970’s, Brother Theodore returned to school, and in
1977 was awarded a Bachelor’s Degree in History by Saint Martin’s College (now University).
He later enrolled in a course in library technology and he then worked in the periodicals
section of the Saint Martin’s College Library for several years. At various times, he was in
charge of the Abbey commissary, looked after the Abbey motor pool, and assisted with the
care of Abbey guests. In 2012, Brother Theodore celebrated his golden jubilee of monastic
profession.

In middle age, his care for his aging widowed mother was a fine example of filial piety. At
that time, Brother Theodore developed a strong interest in the Byzantine Catholic Church of
his ancestors, and he often attended the Byzantine Divine Liturgy accompanied by his mother,
a devotion he continued long after her death. Brother Theodore also developed a great love of
icons and iconography, and icons dominated the walls of his monastic cell in his later years.
Brother Theodore is survived by his monastic confreres, by his brother and sister-in-law,
Mr. and Mrs. Michael Vavrek, and by several cousins.

His monastic community, family and friends, will gather at the Saint Martin’s Abbey Church,
Lacey, at 7:30 p.m., on Tuesday, 19th January 2016, for a vigil service. Mass of Christian
Burial will be con-celebrated in the Abbey Church at 1:30 p.m., on Wednesday, 20th January
2016, followed by burial in the Abbey Cemetery. The Right Reverend Neal G. Roth, O.S.B.,
Abbot of Saint Martin’s, will be the principal celebrant for the Mass. The Reverend Gerard
D. Kirsch, O.S.B., will deliver the occasional homily, and the Monastic Schola, under the
direction of Brother Aelred M. Woodard, O.S.B., will provide the music.

May the angels lead him into Paradise!