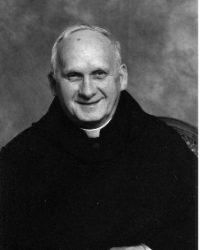 Brother Lawrence Donald Vogel, O.S.B. (1935-2015) Our beloved confrere, Brother Lawrence Donald Vogel, O.S.B., fortified by the Sacraments of the Church, passed to God at St. Peter Hospital, Olympia, early in the evening on the first day of May, 2015, following a brief illness. He was sustained in his final moments by the presence of friends and loved ones praying for his peace. His passing to God was as gentle as the life he lived. Donald Vogel, a twin son of Alvin Vogel and Maryrose Vogel, (née Jansen) was born in Crescent, Nebraska, on September 3rd, 1935. The family moved to Renwick, Iowa, and later to Deer River, Minnesota, where he attended Primary School. In 1955, young Donald enlisted in the United States Army, and served in Europe, where his duties included that of communications officer. Following his release from the United States Army, in 1958, he moved to Washington State, where a sister of his mother was residing in Silverdale. In 1964, while employed at a Weyerhauser sawmill in Everett, Washington, he was baptized a Roman Catholic at Our Lady of Perpetual Help Church by The Reverend Richard J. Gallagher. He was confirmed the following year by The Most Reverend Thomas E. Gill. Donald heard about Saint Martin’s Abbey from friends. He was invested as a Benedictine novice on 12th June 1969, by The Right Reverend Gerald R. Desmond, O.S.B., Abbot, and made his simple vows on 13th June in the following year. Father Adrian J. Parcher, O.S.B., later sixth Abbot of Saint Martin’s, was his novice master. Donald took “Lawrence” as his name in religion. Brother Lawrence, as he was now known, worked in many areas. For some years, he was our campus postman, faithfully seeing to the processing of mail from both on campus and off. He was head of Plant and Grounds for many years following his stint as postman, and in these two positions got to be known to most of the campus community. Brother Lawrence was a skilled craftsman, and enjoyed creating beautiful things from wood both before and after his retirement. He had a liking for dogs, and was involved in the care and keep of several dogs directly or indirectly affiliated with the campus, including “Ranger”, “Prince” and “Inkspot”. In spite of his naturally quiet nature, he was a people person, and bonded with many an individual over coffee. Our late confrere was a man of prayer, a deeply spiritual individual. He had a strong devotion to the Blessed Sacrament, and regularly spent quiet time praying in the Abbey Church’s Blessed Sacrament Chapel before the day’s first community Office. The daily recitation of all fifteen decades of the rosary was his regular practice for years. Brother Lawrence was known for his strong devotion to Mary, Mother of God. The Italian marble statue of Mary which is a fixture in the Church’s rose garden exists through his efforts; the concrete star base on which the statue rests is his handiwork. Brother Lawrence was a kind, gentle sensitive individual. He was helpful to others, especially to the elderly. In case of a disagreement, he would most likely be the one to first offer the hand of peace. In addition to his religious community and his many dear friends, Brother Lawrence’s survivors include: his twin sister, Donna Jean Vogel-Keen, of California, and sister Rose Mary Vogel-Laxamana, of Arizona; nieces Debbie Keen-Gaffey and Sharon Keen-McIntyre; and grand nieces Rebecca “Lollipop” Gaffey, Dana Gaffey, Michelle McIntyre, and Amber McIntyre. He was predeceased by his parents and his two brothers. His community, family and friends, will gather at Saint Martin’s Abbey Church at 7:30 p.m., on Monday, 11th May 2015, for a Vigil Service. Mass of Christian Burial will be con-celebrated in the Abbey Church at 1:30 p.m., on Tuesday, 12th May 2015, followed by burial in the Abbey Cemetery. The Right Reverend Neal G. Roth, O.S.B., Abbot of Saint Martin’s, will be the principal celebrant for the Mass of Christian Burial. The Reverend Gerard D. Kirsch, O.S.B., will deliver the occasional sermon. The customary suffrages for the deceased are recommended to the members of our American Cassinese Congregation. May the angels lead him into Paradise! • Saint Martin’s Abbey • 5000 Abbey Way, SE • Lacey, Washington 98503 • Abbot Neal G. Roth, O.S.B.,